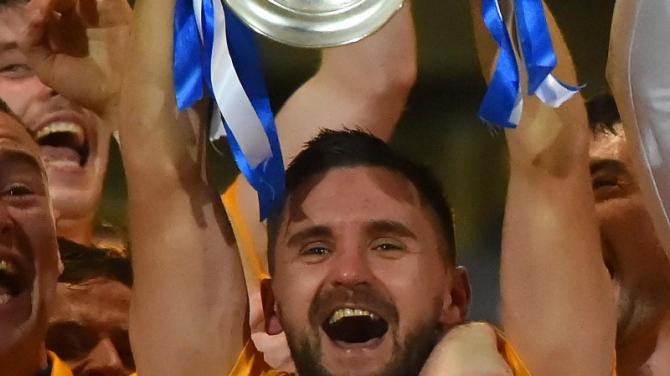 DROMORE captain Conor O’Hara realised a boyhood dream as he climbed the steps of the Healy Park stand to collect the O’Neill Cup.

A rousing acceptance speech captured all the emotion of the occasion, and expressed with disarming honesty the enormity of the occasion for the 31-year-old.

Of his three Championship titles, this was by far the sweetest, given the role of leadership he was entrusted with by a management team that placed their trust in him unconditionally.

“It’s something I have been dreaming about since I was a young cub, since I watched Fabian O’Neill lifting it in 2007,” said O’Hara.

“It’s what I wanted to do, to get up those steps. I’ve been lucky to do it as a player before, but to get up there as captain is just unbelievable.

“I thank God and I thank each and every man in that squad, and the management for getting us over the line, for giving me the chance to lift the cup.”

After an uninspiring first half, the St Dympna’s really got going after the break, cutting through the opposition cover with searing pace and clinical finishing.

“I thought Coalisland were brilliant in the first half, and they’ll be disappointed that they didn’t put the scores on the board when they were on top.

“We went in at half-time disappointed with our own performance, we probably played the occasion a wee bit more than the actual game.

“So we said to ourselves that we don’t want to allow this moment to slip by.

“We did the simple things well and right, and we were clinical on the score-board, which allowed us to build the lead, and thank God we just got over the line.”

Corner back O’Hara was one of many heroes who put their bodies on the line to prevent Coalisland from staging one of their trademark comebacks late in the game.

“Any time you watched Coalisland games this year, you know that they’re going to go for the full 60, 70 minutes, whatever it is.

“We knew that we were going to be facing an onslaught at some stage if we were ahead. We knew every single ball had to be fought for, and every single man had to put their bodies on the line to get it out, and we did that.”

“We knew that Coalisland have a never-say-die attitude, and anybody that has watched the games this year knew it.

“We knew we were going to be facing an onslaught in that last ten minutes, no matter what the score was, so we knew that we had to be there when the ball went in, breaking ball, dirty ball, we just had to be there and we had to put our bodies on the line.”

O’Hara was a member of the last Dromore team to lift the O’Neill Cup ten years ago, and there have been some difficult times for the club through the decade that followed.

“It’s been a long and hard ten years, we have had some close battles that we haven’t come out on top in, but our supporters have always stuck with us, they’ve always been there.

“And I’m so happy that we can bring the O’Neill Cup back for them.”

This year, a concerted effort was made to work on the small margins that made all the difference in narrow defeats over the past few seasons, and a driven Dromore side delivered on all the big occasions.

“You can look it in two ways. You can put the head down, you can feel sorry for yourself, or you can look at yourself,” said their captain.

“And we just felt that we couldn’t be denied if we showed up like we did in the second half.

Now the Dromore players and their supporters have time for some celebrations before they turn their attentions to an Ulster Club Championship clash with the Fermanagh champions on December 4.

“First and foremost, we’re getting a wee break for it, which I think is vital.

“So we’re going to enjoy the next week or so, and then we’ll get the head down next week and think about Ulster then.”

Dromore will begin their provincial campaign with a clash with either Derrygonnelly or Enniskillen Gaels, who meet in the Fermanagh final this Sunday.