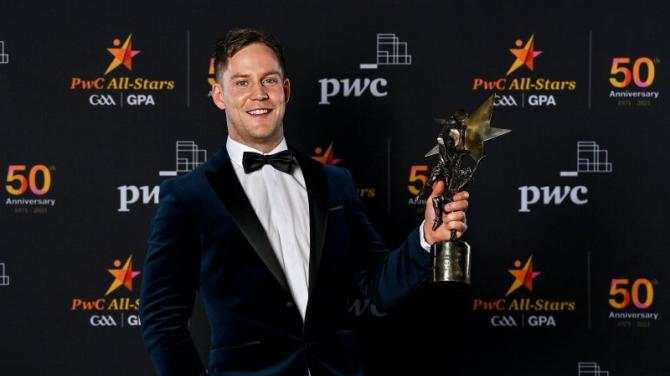 A fourth Sam Maguire Cup triumph ended a memorable season for the Red Hands, and the annual awards night saw them dominate the selection.

McGeary was also voted Footballer of the Year, a much deserved award for a man who epitomised the skill and battling qualities of a superb team.

Other Tyrone players will justifiably feel disappointed at being overlooked by the selectors. A total of 15 Red Hand stars were nominated in recognition of their contribution to an unforgettable season.

Tyrone fans were taken on an unbelievable journey which ended on a day of triumph at Croke Park, where the Red Hands lifted a fourth All-Ireland title with victory over Mayo in the final.

It was a remarkable achievement by new managers Feargal Logan and Brian Dooher, who came into the job in the most difficult of circumstances, unable to connect with their squad for months due to Covid-19 lockdown.

And when they did get down to work and begin competitive action, their efforts to build a team and develop a footballing strategy were curtailed by the introduction of a shortened, regionalised National League campaign, with just three games in the four-team Division One North section.

An NFL semi-final drubbing by Kerry prompted a re-set and some serious soul-searching, but it all came good in the Championship as they blazed a trail to September glory.

The awards ceremony was held virtually and televised live in RTE, after the traditional banquet was cancelled due to the Covid-19 pandemic.

In a vote carried out among inter-county players, McGeary saw off stiff competition, including his own Tyrone team-mate Conor Meyler, who was also among the three nominees, for the overall award.

From the Pomeroy club, Kieran was at the heart of Tyrone’s magnificent march to Sam Maguire glory last summer and was chosen at centre-back on the PwC All-Star football team of 2021.

This additional acknowledgement means he follows county men Seán Cavanagh (2008), Stephen O’Neill (2005) and Peter Canavan (1995) as previous Footballers of the Year from the O’Neill County.

Darragh Canavan missed out on the PwC GAA/GPA Young Players of the Year award, which went to Mayo’s Oisín Mullin, who was chosen for the second year running.

Tyrone’s stunning finish to the football season has been reflected in the PwC All-Stars for football 2021 where the Red Hand County have been awarded eight prestigious places on a team which features nine first-time winners.

Lee Keegan’s iconic status in Mayo football is further enhanced with a fifth career PwC All-Star award and there is an award for tigerish Kerry defender Tom O’Sullivan. Tyrone shot stopper Niall Morgan is joined by four county men at the back in Padraig Hampsey, Conor Meyler, Kieran McGeary and Peter Harte.

Niall Sludden and Darren McCurry continue the Tyrone representation in an attack headlined by Kerry’s brothers Paudie and David Clifford.

After nine awards last year, Castleknock’s Ciarán Kilkenny is Dublin’s sole PwC All-Star in 2021 and becomes a five-time All-Star in the process. Mayo flier Ryan O’Donoghue completes the forward unit of a final 15 comprised solely of players from the four provincial championship winners.

Congratulating the winners, GAA president Larry McCarthy said: “For the second year running our games at club and county level have been a source of joy for people in the midst of the pandemic, and I want to thank them most sincerely for their dedication and their endeavours.

“The PwC All-Stars offer us a chance to reflect on the multitude of great games that lit up our summer and this football selection is a great representation of that. It is a huge honour for those selected and one shared by your families and clubs who have helped shape you. It is an exceptionally memorable night for overall winners Cian and Kieran as well as Oisín and Eoin who have been deservedly singled out for additional recognition by their peers.

“Over the last 50 years the All-Stars has become synonymous with excellence in Gaelic games, and I thank our partners in PwC for their assistance in promoting these iconic awards.”

Tom Parsons, CEO of the GPA, said: “First of all a word of thanks to every player who gave us another exceptional season in 2021. The excitement, colour and drama you brought us in what was at times a very difficult year for the country is hugely appreciated. To all the nominees a massive well done and to the fifteen winners congratulations. Much like subs pushing for a starting place, there were many nominees who could slip into the final selection without weakening it which makes the achievement of the fifteen winners all the more special. You were the best of the best.

“To Cian and Kieran, this caps off a remarkable year for you both. Your performances throughout were exceptional – well done on being selected as the PwC Players of the Year. And to Eoin and Oisín a massive congratulations on being named the PwC Young Players of the Year for the second successive year. That is a superb achievement and testament to your consistency of performance.”

Feargal O’Rourke, Managing Partner, PwC, said: “In this historic year, marking 50 years of the All-Stars, I would like to offer heartiest congratulations to the winners of the 2021 PwC All Star football awards from everyone at PwC. An All-Star award is due recognition of an outstanding season, something these players, their families and clubs are all no doubt hugely proud of. Each of the winners is thoroughly deserving of this honour, an acknowledgement of both their individual displays and their ability to play as part of a team.

“We would also like to pay tribute to Cian Lynch and Kieran McGeary, the winners of the PwC GAA/GPA Player of the Year awards for hurling and football respectively. As All-Ireland champions, to stand out above everyone else really is the mark of an outstanding season. And congratulations also to Eoin Cody and Oisín Mullin, the winners of the PwC GAA/GPA Young Player of the Year awards in hurling and football.

“While 2021 was another challenging year for everyone, Gaelic Games continued to give everyone a lift throughout the season, with amazing games, performances of the highest calibre and top-notch entertainment. Congratulations to all of the winners for the part they played in lifting our spirits and we wish them all the best for the 2022 season.”

The winners were announced live as part of a special programme on RTÉ television which replaced the traditional awards ceremony banquet, which was cancelled due to the pandemic.

The PwC All-Star football team was chosen by a panel of Gaelic games correspondents drawn from across print, radio, tv and digital media which was chaired by GAA president Larry McCarthy in what is the 50th year of the awards first held in 1971.