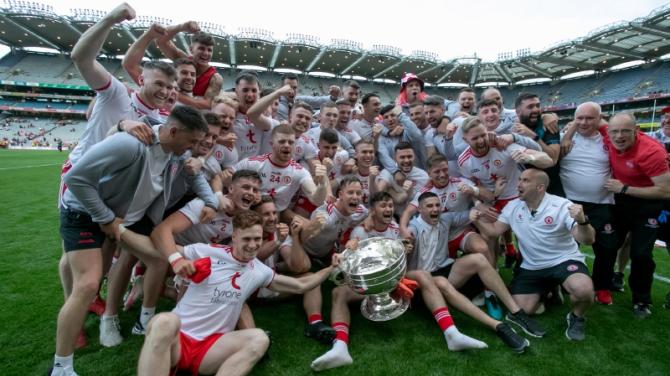 TYRONE’S attention to detail, coupled with a collective self-belief, were the critical factors in their All-Ireland triumph, according to Ulster GAA secretary Brian McAvoy.

And the provincial chief has claimed that a number of other Ulster counties can take heart and optimism from the Red Hands’ triumph last season.

“Their high-octane game, coupled with an innate belief in their own ability, were key factors in this great triumph,” he says in his annual report.

“All-Irelands aren’t won easy and you have to make every opportunity count. Tyrone created the opportunity and weren’t found wanting when it arose.

“Tyrone’s attention to detail and an inner self-belief were critical factors in this All-Ireland triumph.

“The O’Neill County success is a great fillip for Gaelic Football in Ulster and given the tight margins in most of the games in the 2021 provincial championship, many of our counties will undoubtedly have reasonable aspirations for the season ahead.”

And McAvoy singled out joint manager Brian Dooher, a double All-Ireland winning captain in the noughties, for special mention.

“The Tyrone success crowned a magnificent first year in charge for joint managers Fergal Logan and Brian Dooher, with Brian gaining membership of an exclusive club of just five people to have both captained and managed All-Ireland Senior

“The journey they made from Killarney in June to Croke Park in September was remarkable - but this is a remarkable team.”

The Ulster secretary lauded Tyrone’s ‘brave and courageous’ decision not to fulfil their All-Ireland semi-final fixture against Kerry due to a wave of Covid-19 cases which swept through their squad last August.

“Much discussion – and not a little degree of controversy – surrounded Tyrone’s All- Ireland semi-final meeting with Kerry.

“When Tyrone played Monaghan in the Ulster Final on 31st July, four of their panel members and joint-manager Fergal Logan were unavailable due to the fat they had either contracted COVID-19 or had been identified as close contacts.

“In the days following the Ulster Final things deteriorated within the Tyrone camp and every member of the panel and background team were tested. The results showed that a significant number of panel members had tested positive, with some displaying very severe symptoms.

“The Central Competitions Control Committee postponed their All-Ireland semi-final by six days until 21st August. However as more and more players returned to training (though some were unable to do so immediately following their isolation period) it became clear that the effects of COVID-19 had taken their toll and on 14th August the Tyrone County Committee issued a statement stating that in the interests of player welfare and safety, they had reluctantly taken the decision that they would be unable to fulfil their All-Ireland semi-final fixture on 21st August.

“It was a brave and courageous decision, based on expert medical evidence.

“The Tyrone players, management and County Committee knew that their players were in no physical condition to engage at the high intensity level that an All-Ireland semi-final merits. The CCCC had a hard call to make, as the preparations of Tyrone’s All-Ireland semi-final opponents Kerry and indeed All-Ireland finalists Mayo (who defeated Dublin on 14th August) would also be impacted by any further postponements.

“Those counties must be applauded for their co-operation and collegiality which paved the way for a solution which was acceptable to all sides, with Tyrone being granted a further week and the All-Ireland final being moved back to 11th September.

“As the saying goes, the rest is history.”

McAvoy reflected on a two-year battle with Covid-19 which has changed everyone’s lives dramatically.

“Little did we know 22 months ago how dramatically our everyday lives would be altered due to the Covid-19 pandemic.

“Many things we took for granted back then take place now in either a much-diluted form or not at all. Many of us have lost loved ones to this dreaded illness, with official figures telling us that the pandemic has claimed over 8,500 lives to date on the island of Ireland and, unfortunately, this figure will continue to rise.

“The key factor in the phased ‘opening up’ of the country has been the vaccination roll-out, though as we have seen that even with higher levels of protection in the community the virus remains highly transmissible and still continues to cause major disruption to everyday life.

“Throughout 2020 the Association was able to operate with a high degree of synchronisation across both political jurisdictions.

“This became more problematic over the past year as the vaccination roll-out programme differed north and south, though there were higher levels of equalisation as the year progressed. By mid-April GAA clubs in the north were allowed to train outdoors in pods of 15, with club games allowed to resume from 7 May, with limits on spectator numbers. It was a further month before club games were allowed to take place in the ‘26 Counties.’

“The decision to go ‘county first’ in 2021 (the reverse of the previous year) proved to be a correct one, as the inter-county season was allowed to get underway on 15th May.

“At the outset of the pandemic the ethos of the GAA shone through as volunteers from all our units placed their facilities at the disposal of the authorities for use as testing centres or as ancillary centres. All over the country the GAA was at the vanguard of the community response.”

The GAA’s contribution to the Vaccination Programme was immense, and played a major role in the measures which were necessary to respond to the crisis.

“Also, in 2021, we were at the forefront of the Vaccination Programme as Ulster GAA, in partnership with Volunteer Now and the British Red Cross, led the volunteering effort at the Mass Vaccination Centres across the north from January – August 2021. A total of 435 volunteers were deployed seven days per week, 12 hours per day, across six vaccination centres, spanning all NI Health Trust areas for the seven-month period.

“Of these, there were 162 dedicated GAA volunteers from 64 clubs and they gave a mammoth effort ensuring the centres ran efficiently, safely and effectively as possible. These volunteers gave an outstanding commitment over the seven difficult months and made a valuable contribution to the vaccine rollout.

“They are unsung heroes of the Covid-19 response. We were proud to work with our partner organisations and with our colleagues in the Health Service and local Trusts in delivering this vital vaccination programme, assisting at the Mass Vaccination Centres at: Enniskillen, Omagh, Craigavon, Foyle, Ballymena, and Belfast.

“In total, GAA volunteers gave 12,000 volunteering hours to this project. I wish to place on record our thanks to all those who volunteered: it has certainly been a very rewarding programme and has highlighted the strength of Gaels and others in their desire and commitment to helping their community.

“I thank also the Ulster GAA team who led this initiative, giving many hours of service in ensuring its success. In particular I thank Diarmaid Marsden, Sharon Haughey-Grimley and Pierce Caherty who had the overall responsibility of scheduling rotas and co-ordinating the Ulster GAA response.”