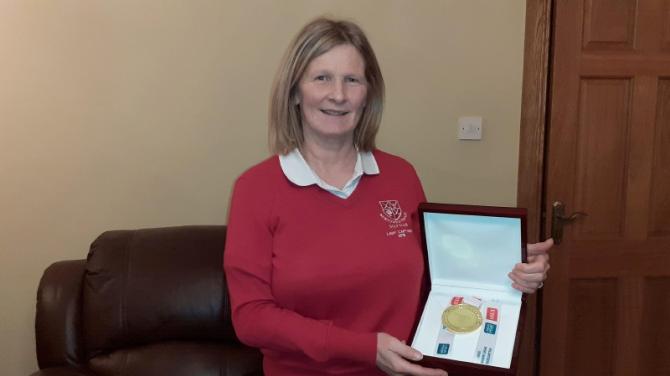 THE junior convenor of Newtownstewart Golf Club has been honoured at this week's virtual Federation of Irish Sport Volunteers awards.

Karen Ballentine has undertaken the role of junior convenor for the past 10 years at the club. She is known as hard-working, enthusiastic, caring, professional and reliable, and is highly respected by the parents and carers.

With their support, each year Karen has organised lessons for 20 juniors and had upwards of 40 participating in the Summer Juniors programme.

She has ensured that all young people interested in golf could avail of equipment provision, discounting group coaching and second-hand golf gear where needed and has provided opportunities for the juniors to play at other clubs.

She has also organised visits to the Opens held in NI as well as fun days, dinners and prize giving.

By encouraging and facilitating young people to participate in the sport, not only have many went on to be active members of the club but have made friendships.

Karen also introduced the concept of junior captains and the club’s Claret Jugs, which are contested keenly each year.

She will be honoured this week at the special virtual awards ceremony.

The Volunteers in Sport Awards were created to champion the contribution, commitment and dedication of the army of 450,000 volunteers across the country who go above and beyond by giving their time to Irish sport and physical activity each year.

These volunteers dedicate some 37.2 million hours of volunteering across the country’s 13,000+ sports clubs and associations every year.

Towards the end of 2020, members of the public, as well as sports clubs and governing bodies were invited to nominate an individual whose contributions to sport has made a real difference to their community, club or county.

The nominations and award recipients were selected by a judging panel consisting of 11 individuals drawn from sports administration, the volunteer community and media, including former director general of the GAA, Paraic Duffy, RTÉ broadcaster, Marie Crowe and chief executive officer of CARA, Niamh Daffy.

Speaking about the awards, the chief executive officer of the Federation of Irish Sport, Mary O’Connor said: “Sport plays a central role in the social fabric of every community in Ireland, yet it would not happen at all without the army of volunteers who dedicate their time and expertise across pitches, courts, tracks, pools and community halls across the country.

"This year, more than ever before, we have seen just how essential the role of the volunteer is in our local communities and to this end, it will be an honour to be able to recognise so many of these volunteers at this week’s virtual Volunteers in Sport awards.

"I would like to extend my warmest congratulations to all of this year’s recipients, and also thank EBS for their amazing support in bringing the awards – and wider recognition – of volunteers in sport in Ireland to life.

The awards will be streamed live each evening from 7pm on the Federation of Irish Sport’s Facebook page here: https://www.facebook.com/federationofirishsport/ with the awards schedule listed below:

For more information on the awards, visit http://www.volunteersinsport.ie/