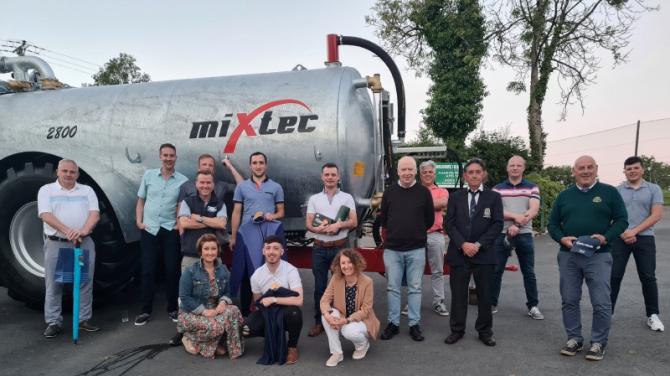 The competition, sponsored by Peter Johnston of Mix-tec Sixmilecross, was very well subscribed over the Friday and Saturday. A fine array of prizes was on offer stimulating keen competition from all the competitors taking part. Friday was a nine hole stableford competition of which the results were as follows;

The gents competition on Saturday was a stroke play competition. The results were as follows;

The ladies competition on Saturday was a stableford competition. The results were as follows;

At the prizegiving in the evening, Peter amnd Roisin welcomed all their guests and competitors for taking part in the competition. They particularly welcomed Kevin Devlin, a visitor from Philadelphia. They congratulated the winners and presented them with their prizes. They particularly highlighted Mark Williamson for shooting such a low score off a handicap of 12.

The captain Bob Treanor replied by thanking Peter and Mix-tec for sponsoring the competition and wished him well with his business in the future. He too congratulated all the winners and thanked all the competitors for taking part.

Meanwhile, congratulations were extended to the Aughnacloy Pierce Purcell team who beat Castlehume 3 and 2 to proceed to round two of the competition against Concra Wood Castleblaney.

Wednesday, June 16 – The Rose Bowl Memorial mixed event - a nine-hole competition commencing at 6pm. Teams of one lady and one gent.

The club is in the process of planning juvenile coaching for the summer months. It’s principally for 11 years and over – call 07785987894 to book a place.