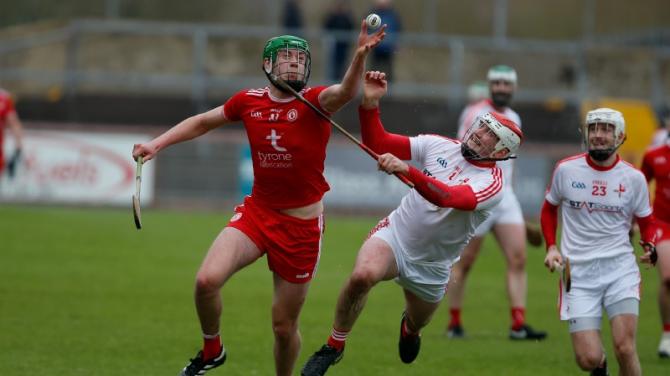 With two wins from two games, the Tyrone hurlers are flying high and performing with flair and confidence. They were much too polished and potent for Louth in their latest NHL Division 3A tie at Healy Park, coasting to a 15 points success by 2.23 to 1-11 to consolidate their position at the top of the table.

Damian Casey was in sparkling form, hitting 1-10, all but three points of his tally coming from play, but several others chipped in with scores, including a 1-4 haul from midfielder Ryan McKernan.

The Red Hands were solid defensively as well, and are performing with cohesion and spirit in these early stages of the season. Tougher challenges lie ahead, however, with Monaghan due to visit Healy Park on Sunday week for the next tie.

“Monaghan will be stronger, they’ll probably have their Castleblayney contingent back for that game,” said Tyrone manager Mattie Lennon.

“The next three games will be very tough – Monaghan, Roscommon and Armagh. It will go down to the wire, I have no doubt, but we’ll just look at Monaghan.”

It was clear from the outset that Tyrone were intent on taking the game to their opponents, as Bryan McGurk fired in a shot which was brilliantly saved by goalkeeper, Kevin McNally, who deflected out for a ’65, which Casey converted.

And they had another goal chance when Conor McNally latched onto a breaking ball a couple of metres from goal, but his shot went just wide.

Chris Cross sent Casey through for another score, and the full forward continued to hit the target, hitting two more from play and converting an 85 metre free.

Casey had scored all six points as the home side eased into a 0-6 to 0-0 lead, and Bryan McGurk got in on the scoring act in the 12th minute to increase the advantage.

Louth eventually got their first score in the 14th minute, when Darren Geoghegan converted a free, but the home side responded immediately with a goal.

Unsurprisingly, it was Casey who hit the net, fetching Tiarnan Morgan’s sideline cut to drill a low shot to the net past goalkeeper McNally.

But Louth hit back with an immediate response, a David Kettle point followed by a goal in the 20th minute, David Stephenson providing the pass for Geoghegan to steer his shot past Conor McElhatton.

The ‘Wee County’ continued to push forward, but with Dermot Begley, Ruairi Devlin, Lorcan Devlin and Chris Kearns defending solidly at the break, their scoring opportunities kept to a minimum.

Conor McNally sent Morgan in for a well-taken score, but Louth kept in touch with points from Geoghegan and Gerard McKeown. But with further scores coming from Casey and Ciaran Lagan, Tyrone took a comfortable 1-11 to 1-5 lead into the interval.

Another Casey score stretched the advantage within a minute of the restart, and while Louth rallied for McKeown to slot over his third of the afternoon. And when McKernan smashed home Tyrone’s second goal in the 43rd minute, they were well on their way.

Geoghegan, David Stephenson and McKeown did pull back scores for the visitors, but the Red Hands were never in trouble, and quality scores from Morgan, Casey, McKernan and Chris Kearns carried them to an impressive success.

“I’m delighted with the performance overall. The team performance was very, very good, and it’s great to get two points,” said manager Lennon.

“Last year Louth beat us up in Darver in the second game, and I knew they would be strong coming here, but overall I’m very pleased with how the lads played as a unit and as a team.”

Damian Casey led the way with a 1-10 haul, but the manager was pleased that several other players also chipped in with scores.

“We had a good spread of scores today from a number of different players. Damian is a very good player, but it’s great when other lads come up and take scores as well.

“That’s the beauty of it and that’s what we’re trying to do, is spread the load across the whole team.”

Lennon has been forced to introduce a number of newcomers to his squad, but they have made the transition with confidence.

“There’s a lot of new men in the squad in general, and the new lads that came in there today played very well. That’s the pleasing thing about it, that everybody is pulling the one way. We’re trying to play as a unit and as a team.

“There’s times it doesn’t work, but today some of it came off, some of it didn’t. We were solid defensively, our full back line and half back line didn’t give away much, didn’t give away a lot of frees, and our distribution out of defence was good. And that’s key sometimes, the quality of ball we’re getting in to our forwards, and the speed we were doing it at.”