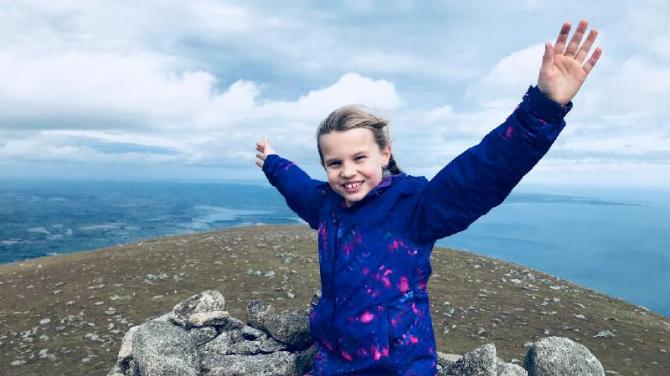 This summer an eight-year-old girl from Aughnacloy, Madison Weir, set herself a challenge to raise £800 for three local charities in County Tyrone by making people smile over the holidays.

Madison, an Aughnacloy Primary School pupil, was determined to raise money for local charities or good causes. She set up a Facebook page with the help of her parents, Lester and Kim, called @thecarnteelhappycottage to promote her work.

Her mum, Kim, said: “There was never any doubt that the first good cause would be Sperrinview Special School in Dungannon, as her little cousin Courtney Weir attends there along with her other 115 friends. She knows all too well that local schools struggle financially in the political climate and she wanted to make sure that those most in need are supported and the children are important (even if it was only a small amount of money).”

Lilac (Life is for Living after Cancer) also benefited from Madison’s fundraising. Having witnessed loved ones struggle with the horrible illness that is cancer, the schoolgirl wanted to help.

Kim continued: “This charity gives much needed help to people who need it and she wanted to make sure those that used the charity were smiling because they knew we are proud of how much they have been through.”

Madison also raised money for Niamh Louise Foundation based in Dungannon. “Madison is only eight but when she learned of young people taking their own life in Dungannon and learned about the work the charity was doing she was determined to support them. In her words: ‘Nobody should be bullied or feel sad, everyone needs to know that people want to help’.

She then made ‘Happy Jars’ and sold these on Facebook – the jars are filled with positive quotes for 30 days.

“Madison wanted to make people smile and to stop and remember that someone is thinking of them if they felt sad,” Kim continued.

She attended Aughnacloy Festival selling her home-made crafts, had a guess the name of the bear and a raffle. She had over 40 prizes in her raffle (£750 RRP) which she accumulated herself by approaching all the local businesses in Aughnacloy and Dungannon town.

In August Madison decided she would convince her mum to climb the Slieve Donard Mountain in Newcastle with her and seek sponsorship for doing so. They successfully completed their challenge up and down the mountain in under three and a half hours on Madison’s birthday, September 15.

“In total, Madison raised £1,664 for charity. She decided she wanted to give each charity £500 with her school receiving a ‘buddy bench’ of £100 and the remainder £64 to decorate and promote it. She wanted to make sure that all her friends in Aughnacloy always had a playmate at lunchtime and thought the buddy chair would make sure they did.”

On the morning of September 24, Madison got her mother Kim to take her to all the charities where she presented them with their cheques. “She was so inspired to meet all the lovely people that would be in receipt of the money. What made it even more special was that people took the time to thank her out of their busy days and explain what the money would be used towards.

“This may not be a huge amount of money for any charity, but if young people like Madison were all to be inspired our world would be a kinder place where our young minds lead and inject creativity into the community to support each other.

“Inspiring young people to be kind and to help is exactly what she wanted to do and I hope it works.”

Madison has been nominated for the Supervalu Superstar Award 2018 and The Diana Award 2019.

Kim concluded: “We wish her all the luck in the world as she continues to help others in the months ahead with her charity work; don’t forget to like Madison on Facebook @thecarnteelhappycottage.”