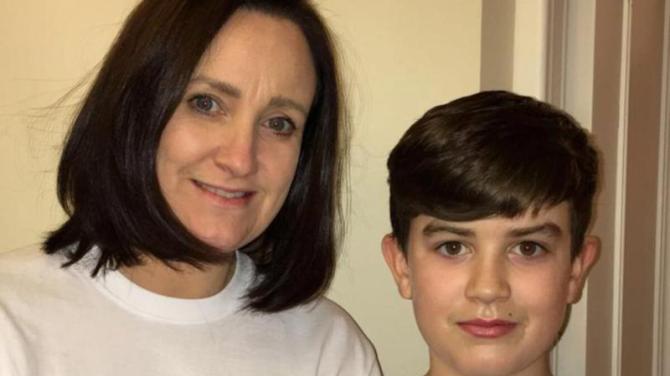 A young boy from Omagh will be a part of this year’s ‘Countryfile Ramble’ for BBC Children in Need. Thirteen–year-old Mark McAnulla and his mum, Aine, will join Anita Rani and a group of Countryfile viewers, as they ramble through Hare’s Gap in the Mourne Mountains at the beginning of October.

Their ramble will be filmed and broadcast in a special programme titled the Countryfile Ramble for BBC Children in Need on Sunday, October 28, on BBC One. Mark was diagnosed with ME in 2016, after taking ill with a headache, following a swimming competition. Mark lost the ability to walk and talk and was admitted to hospital.

After various tests the consultants were unable to work out what was wrong and a couple of weeks after being admitted to hospital Mark began to talk again, and was later discharged in a wheelchair. A keen athlete and swimmer, Mark was determined to walk again and after a long recovery was able to walk again unaided. Around this time Mark was diagnosed with ME and although he could now walk unaided he had a psychological journey to face, with one of the effects of this being that he struggled to sleep.

Mark was introduced to the Koram Centre for counselling, psychotherapy and psychosocial support in Strabane and through the centre’s art therapy programme, Mark’s mental health and sleep has improved.

Mark’s mum, Aine, said: “With the help of Koram Centre, Marks overall mental health has greatly improved. The work that they have done with Mark has truly worked wonders and I’m not sure where we’d be today without their support.”

The Koram Centre currently receives a grant of £35,261 from BBC Children in Need, over three years, to fund the part-time salary of an art therapist, who provides counselling and creative therapy to children and young people who are experiencing behavioural or emotional difficulties. Art therapy helps to improve the young people’s psychological and emotional wellbeing.

Ahead of the ramble, Mark added: “I’m really looking forward to taking part in the Countryfile Ramble. It’ll be a challenge for me but I’m really determined to complete it. I hope that my story will inspire other young people in the same situation to live life to the fullest!”

The Countryfile Ramble is now in its fourth year, having raised £4.1million for the charity since 2015. This year the presenters will be rambling in some of the nation’s most beautiful locations, including Galloway Forest Park in Scotland, Caernarfon in Wales, Ely in Cambridgeshire, the Isle of Skye and the Mourne Mountains in Northern Ireland. Once again the presenters are calling on the public to walk the nation and do their own sponsored rambles to raise money for the charity, which will help support disadvantaged children and young people across the UK. In County Tyrone, BBC Children in Need currently funds 14 projects to a value of £612,860.

Since the Countryfile Ramble began in 2015, nearly 3,000 people have joined the presenters on their rambles across the UK, collectively racking up more than 8,250 miles. This year, the public can join teams of walkers across the UK hosting a Countryfile Ramble for BBC Children in Need or set up their own and join the thousands rambling across the nations. To host a ramble, visit www.bbc.c.uk/Pudsey to get walking and raising money for the charity.