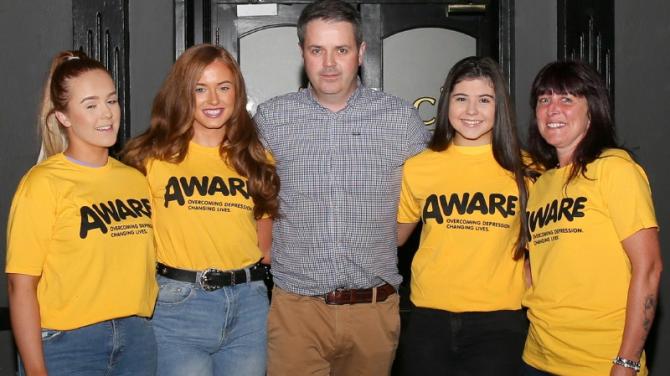 Inaction on suicide prevention issues in an increasingly complex digital landscape has put increased pressure on teenagers today, it was claimed this week.

Fears that social media channels such as Facebook, Twitter, Instagram, Snapchat and Tumblr were contributing to depression, anxiety or other mood-related conditions, has prompted local charity group, Aware, to offer a solution by setting up a new support group, the first of its kind in Northern Ireland, specifically for young adults in Omagh and district.

The group, which is to be officially launched on Thursday, October 18, is targeted at young adults aged 18 to 30 and will run weekly on a Thursday evening at 6.45pm from Strule Arts Centre.

One of the local Aware members behind the idea for the new group, Margaret McCrossan, said the need was evident from the number of tragedies the community has had to deal with and it was felt now was the time to offer the young people of the area an outlet for their concerns.

She added suicidal behaviour had numerous and complex causes and not just one event triggered this act, but a combination of events. Stigma and negative attitudes towards mental health issues and suicide may prevent young people from seeking support or accessing services, she said.

She said she believed there had been at least 10 suicides locally in the past few years all involving young people and hoped the new group would give them, their families, schools and the wider community a safe haven. She added the increased use of social media was adding to their problems and left many feeling vulnerable.

Another member of the Omagh Aware group, Lewis Boyd, said he felt they were responding to "a massive need" in the local area.

"We normally deal with adults with mental health issues, depression and general pressures of life and we felt there was no one for young people. They hadn't a voice or anyone they could go and talk to of their own age group about their feelings. Young ones at schools have taken their lives here over the past number of years. You can see the need is here."

He added that at times when young people sought help they were put on an emergency waiting list which sometimes meant no one was available to talk to them for anything up to 10 weeks.

"If you had a serious illness and turned up at A and E you would get seen right away. It's not the case with mental health issues. That has to change. We're not saying we're going to fill that gap and solve all poroblems, but if someone comes to us they can have someone to listen to them and help put them in the right direction, " he said.

Aware currently run a weekly support group in Omagh Library every Tuesday at 6.45pm., which will continue to run alongside the new support group for young adults.

Both the current and planned support groups are free to attend with no appointment necessary – you simply just turn up at the meeting at the date and time specified and participate.