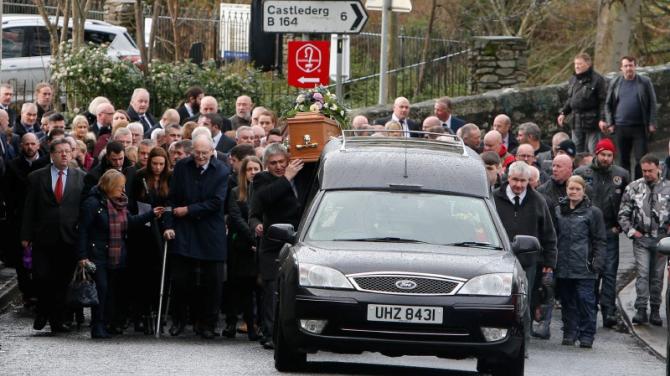 Motorbike enthusiasts and many other mourners mingled in the village of Ardstraw last Saturday to honour popular biker, George Miller, who had passed away a few days earlier. His funeral procession brought the village to a standstill, quite a fitting tribute to a man who many described as a friend, mentor and a family man.

His love of all things to do with motorbikes was legendary and not only did he compete at many races here and across the water, he was a renowned expert on the intricacies of the motorbike engine be it spark plugs, valves, pistons, the connecting rod, crankshaft or the sump - he literally lived and breathed for his bikes!

Conversations with George nearly always had to include all the hidden complexities of the engine and suspension and the dynamics of how the thing rolls down the road and goes around corners. You have a frame and an engine and wheels and some lights and controls and that's it ...but not for him, it meant so much more.

George was born on April 25 1936 and passed away peacefully in his home after a short illness on Wednesday morning of last week. He was the first child in a family of six born to the late Isobel and Charles Miller and according to his own family, was his ‘mummy’s blue eyed boy’.

He was raised by his parents in their home in Clare, Castlederg, and at the age of 15 the family moved to Glenglush where they lived up until 1979 before moving to Ardstraw. George left school at the age of 14 and worked for 25 years as a milkman working for Walls’ dairy in Victoria Bridge. He was a very well-known, well-loved and very well respected member of this community and George made sure that everyone got their milk come rain, hail or snow.

It was in between doing his milk round that George found the time to pursue his passion for motorbikes and this was where his knowledge and expertise shone through.

George met the love of his life Angela and soon bride-to-be. At the young age of 17 Angela married George in Crewe Bridge Church of Ireland on July 16, 1959.

They were blessed with three children Ian, Jacqueline and Jennifer and eight grandchildren, Dean, Emily, James, Alex, Holly, Harry, Chloe and Ryan, all of whom George loved.


In his address at the funeral service in Ardstraw Presbyterian Church on Saturday, Rev Sam Livingstone, Methodist minister in Castlederg, spoke of the colourful and active life that George led.

"George went on to become a successful businessman from starting the business in an old tin shed in Abbey Villas to opening up the famous George Miller Motorcycle shop here in Ardstraw over 40 years ago. People came from far and wide either for business or just for a social visit. Once a bit of a biker myself, I can remember coming to Ardstraw nearly 40 years ago on the back of my cousin’s motorcycle. If you were looking for an old time bike shop then Miller’s of Ardstraw was the place to be. His daughter Jacqueline told me that George once sold 27 motorcycles in one week and it is said that everyone who bought a bike from George became a new friend.

"In the mid-sixties George followed in the footsteps of his younger brother, Albert, taking up road racing. Road racing was his great passion and everyone knew him as a gentleman who always had a great smile. His competitors’ on the other hand saw the other side of George the competitive side which his brother Albert and the Dunlop brothers knew about full well. You would never have seen George without his son, Ian, who was better known as the 'Manager', from the North West 200 to the Isle of Man TT Ian was always there."

Mr Livingstone recalled how another great friend and racing partner, Sam Thompson, knew George very well and had many nice things to say about him.

He quoted Sam: "He rode a BSA DBD Goldstar Superbike when other riders were riding basic ride to work bikes. George had various other bikes, a DMW Aermacchi, Yamaha, and an EMC/Rotax which he bought from someone who was changing to a Yamaha. George proceeded to beat him in the next race on their old bike. George rode Aermacchis for many years all over Ireland and also in the Isle of Man TTs. He was the Irish 350cc Classic Champion for several years and had three Aermacchis on the Dundrod grid for the Ulster Grand Prix Classic race for two to three years. George also owned a Joey Dunlop Replica Honda SP1”.

Mr Livingstone added: "George was someone who never found fault in anything or anyone and will be sorely missed by family and friends and by his community here in Ardstraw. Some would even go as far as to say that George helped to put Ardstraw on the map. So as we say our final farewells I think it is fitting that we turn to Scripture where we can find comfort and peace. I think that I would be right in saying that George had a quiet and personal faith."

He also extended sympathy to George's brother Charles who lived in New Zealand and could not be with them that day and to Ivan from Ballymena, David from Castle Murray and their only sister, Betty, from Victoria Bridge. He was predeceased by another brother, Albert.

"His sister Betty and his brothers have fond memories of Georges’ motorbike antics; from building his first bike in the bedroom to even beating the legend who was Joey Dunlop, given 'it was in the rain' George would always add”.