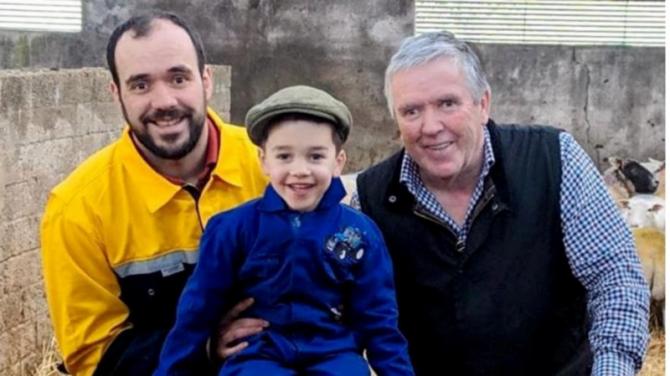 A Tyrone farmer will favour wellies over running shoes and a boiler suit over a tracksuit to complete an ambitious triple marathon challenge for charity.

Aughnacloy sheep farmer, Kenny Little, has set himself the challenge of completing not one - not two - but three marathons this year, kitted out in his on-farm attire of overalls and a pair of yellow wellies.

The proceeds split equally between Parkinson's UK, the 'Harry's Mates' charity and 'Yellow Wellies' (The Farm Safety Foundation), Kenny will put his best 'boot' forward in the hopes of tackling marathons in Belfast, Dublin and Edinburgh.

Having completed the Belfast Marathon last year, Kenny is 'stepping' up his efforts to raise funds - and hoping to have a bit of fun in the process!

According to Kenny, the charities he has selected to support are very personal to him.

"The charities I have chosen are particularly close to my heart, so the money I raise will be divided equally," he said. "The first charity is Parkinson's UK because my father has been told he has the early stages of the illness. Parkinson's UK provide information and support to those effected by the disease.

"The second one is called 'Harry's Mate', which is a social club for adults with learning disabiltiies base in Ballynahinch, which offers activities as well as a befriending service. My brother set up the charity in honour of our uncle, who has special needs, to help people in more rural areas to socialise and make friends.

"The third charity I have chosen is 'Yellow Wellies' (The Farm Safety Foundation.) They have developed unique farm safety training which is delivered in colleges, universities and Young Farmers' Clubs, which is being rolled out in Northern Ireland by the YFCU.

"Through national campaigns such as Farm Safety Week, Yellow Wellies and Mind Your Head, the Farm Safety Foundation is constantly tackling the stigma around risk-taking and poor mental health.

"A dear friend of mine, Walter Elliott OBE, died back in March last year. He was passionate about farming and was a former president of the Ulster Farmers' Union which is why this charity is so important to me to support the health and wellbeing of the farming community. They are all good causes. I will be promoting all sponsors during the marathon by having their logos embroidered into my boiler suit.

"In a bid to raise as much money as I can for the charities, I will be holding a few fundraising events throughout the year, including a barbecue and auction.”