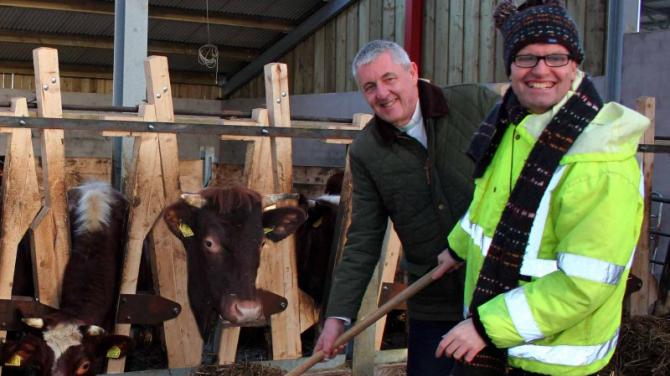 For Omagh-born Presbyterian Moderator, Rt Rev Dr Charles McMullen, this week has been a special ‘homecoming’, as he enjoys a week-long tour of the Church’s Presbytery of Omagh.

Covering west Tyrone and all of County Fermanagh the presbytery is one of the most widespread in the Presbyterian Church in Ireland and is made up of 40 congregations.

Speaking about the tour, Dr McMullen said: “I was looking forward to returning to my home presbytery and spending the week encouraging my colleagues in their ministry and witnessing first-hand the work of the Church on the ground.

“My roots in the area are very deep. My mother grew up as a member of Seskinore Presbyterian Church and my parents, as well as grandparents, are buried in the adjoining graveyard. My father was an Anglican in County Fermanagh, but when he came to Omagh for work, just after the Second World War, he was invited to attend the local Presbyterian Church and the rest is history!

“I was nurtured in my faith in the congregation of Trinity, Omagh, where I can also remember teaching Sunday School and becoming gradually more involved in reading lessons, doing children’s addresses, leading and preaching during services. All of this helped give shape to my call to full–time ministry and I am very indebted to the ministers, elders and Sunday School teachers of my home Church.”

Dr McMullen has already completed two week-long presbytery tours since he became Moderator last June and will have another to complete after his current tour, visiting the Presbytery of Monaghan in March.

In a busy week, Dr McMullen, who is accompanied by his wife, Barbara, will attend nearly 30 engagements. These include visits to local businesses, schools and farms, a mental health charity and a food bank, the Police Service in Omagh and the Church’s only residential nursing home, Harold McCauley House in Omagh, where he will lead a service for the residents on Friday afternoon. There will also a visit to two football teams – Killen FC and Dergview FC - earlier this week, Omagh Hospital and Primary Care Complex and Fermanagh and Omagh District Council offices in Omagh, where the chairman of the council is due to host a civic reception for him on Friday.

Apart from preaching at the start and close of the tour, the Moderator will also meet ministers and their families and attend a United Evening of Prayer in Aughentaine Presbyterian Church. Dr McMullen also conducted the worship at a meeting of the Presbytery of Omagh in Dromore last night (Tuesday).

Speaking prior to arriving in the Presbytery on Sunday, the Moderator said: “Barbara and I relish the opportunity to visit and be alongside manse families in order to hear their particular stories and experiences as well as pray with them. I am looking forward to interacting with members of the wider community in agriculture and business. As I grew up in the area during The Troubles, it will be particularly poignant to be alongside relatives who lost loved ones during that period.

“My presbytery visit will also be in the context of having called the entire denomination to prayer that week and I will be speaking about that as I preach at various services and attend the meeting of Presbytery.”

Co-ordinating the visit, Clerk of Presbytery and minister of Trinity, Omagh and Gillygooley Presbyterian Church, Rev Robert Herron, said, “A Moderator’s visit is always an encouragement to the members and leaders of local congregations and reminds us that we are part of a larger Presbyterian community. The visit of Dr McMullen has special significance in that he is returning to the area in which he grew up, spending a week with people from the local church and community. This will also include conducting an assembly in the primary school that he attended as a young boy.

“We are very much looking forward to having him and Barbara with us and he will certainly be kept busy. In anticipation of their visit next week, I would like to thank everyone for their hospitality and warm welcome, including the chairman of Fermanagh and Omagh District Council, who will be hosting a reception in recognition of the Moderator’s visit.”