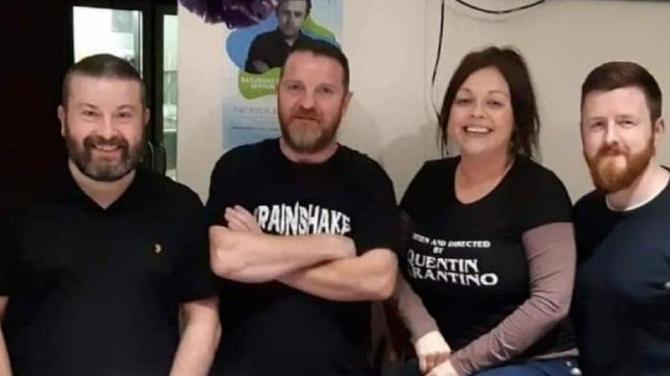 Omagh's Subterranean Community Cinema, formerly known as Subterranean Film Club, will be hosting a scary and spine-chilling Halloween special with the screening of two horror film classics on October 18 and 25.

The local community cinema is a non-profit voluntary community group that operates from The Basement at Omagh Community House, Drumragh Avenue, in the town.

Local film enthusiasts, Conor McGale, Arlene Allerton, Dee Campbell and Aaron McAleer, who are at the helm of the group, recently changed its name from film club to community cinema in a bid to emphasise that it is a community-led service open to everyone.

Commenting on the name change, Arlene said: "We changed our name from Subterranean Film Club Omagh to Subterranean Community Cinema Omagh because it was causing confusion. We were constantly being asked if we were a club that you had to join, so, we discussed this, and thought this name change would be for the best.

"It has had a huge effect already on the traffic coming through our Facebook page, so it was the right decision. We are a non-profit Community Cinema open to everyone and hold our screenings on the last Friday of every month in the basement of Omagh Community House.

"Our aim is to promote equality through the medium of film and to showcase the best in Cult, Independent, Mainstream and local cinema in a relaxed environment.

"We are funded by Film Hub NI and are assisted by Omagh Community House and Focus Omagh."

As a special treat this month, in the run-up to Halloween the community cinema will be screening two Wes Craven directed horror films over the next two Fridays.

Showing this Friday will be the 1996 American slasher film 'Scream'.

Starring David Arquette, Neve Campbell, Courtney Cox and Drew Barrymore, to name a few, the film follows the character of Sidney Prescott (Campbell), a high school student in the fictional sleepy town of Woodsboro, California, who becomes the target of a mysterious killer in a Halloween costume known as Ghostface.

Considered unique at the time of its release, the film combines black comedy with edge-of-your-seat horror.

Meanwhile, the following Friday, October 25, will see the 35th anniversary screening of the 1984 horror classic 'A Nightmare on Elm Street'.

Slasher villain Freddy Kreuger - the most recognisable face in horror history - invades the dreams of a group of four teenagers living on one street in the fictitious town of Springwood, Ohio.

The teenagers are tormented and killed in their dreams by Freddy, a burnt killer with a bladed leather glove.

Upon its initial release the film was met with rave critical reviews and today is considered as one of the greatest horror films of all time.

Doors open at 7.30pm with an 8pm start. Admission is £3 and you can bring your own snacks and drinks (alcohol allowed). Everyone welcome.