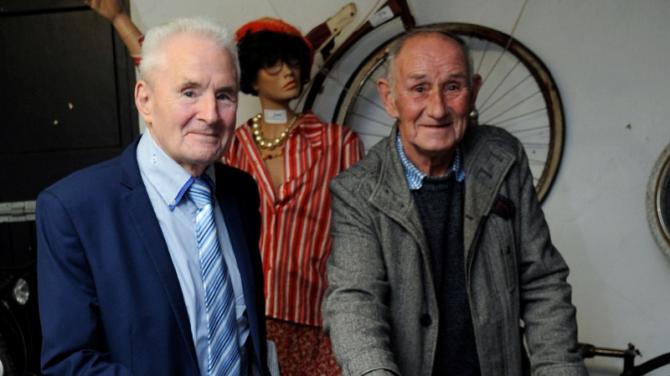 One of Strabane’s most famous sons, the late Pat Gillespie spent his life collecting. But his collection wasn’t just bicycles, cars and multifarious memorabilia – over the course of his impressive 102 years, he also acquired countless friends, admirers and comrades.

The extent of Pat's prolific life was abundantly clear at a special weekend auction, when over 300 of his attentively acquired items – named ‘The Pat Gillespie Collection’ – went under the hammer.

Viewback Auction’s Ballygawley Road showroom was packed to the rafters with items big and small, an outnumbered only by buyers and well-wishers, many of whom had their own unique tales to tell of Pat, or, as he was known locally, ‘The King of Strabane.’

Pat passed away in August of this year. A life well lived, Pat amassed a wealth of items over the years, many breathtakingly unique. It was the job of local auctioneer Geoffrey Simpson to sell the items, which included bicycles of all shapes and sizes, American flags and number plates, war memorabilia, and even a flying helmet and goggles!

According to Geoffrey Simpson, while the auction marked the end of an era, many of Pat's beloved items were snapped up by collectors from as far as Co Wexford and even the Hebrides, Scotland.

“The only way I could describe Pat’s collection is ‘eclectic’," he said. “The items range from the nineteenth and twentieth centuries, right up until the early 1970s, and reflect changing trends.

“Pat liked unusual artifacts, and he really understood the value of objects. He had a great personal interest, and he wasn't concerned about the value of the items. Money wasn’t an important aspect of his life. Sometimes a desire to desire over-rides better judgment, but in Pat’s case, he collected items as to to extend his knowledge and keep an interest.

“His collection was to be dispersed so that other people could get enjoyment from objects he acquires over the years.

“I met Pat on one or two occasions, and as everyone will agree, he was a character. He was very approachable and was very active in the community. He took great delight in helping other people. His life would have been a stimulus to others, and despite his age he did all sorts of things right up until very recently.

“I feel that in today’s world of mediocrity, there’s an absence of people of his calibre. His demise wont only be missed by his family, but also by the people of Strabane and the wider area.”

Throughout his life, Pat made many friends and companions, and while he was a Strabane man in every sense, his connections extend far and wide. So much so that when his home was heartlessly burgled by three masked men in 2017, messages of support poured in from across the globe.

Present at the auction was Ian Veile, a friend of Pat who is originally from upstate New York. He crossed paths with Pat an American car enthusiast’s club.

“When we were at the last show in Lifford, he was trying to buy my Chevy pickup truck!”, Mr Veile recalled. "He had close ties with American Car Club,  and I have fond memories of him from that."

In terms of the collection on sale, Mr Veile said Pat amassed even more items over the years.

“This is only a quarter of it.  Anyone who saw his collection will tell you that this is only part of it. He was famous in the car club for his authentic American police car.

“He was very friendly and very open, and always willing to show his collection to anyone, and take time with them. The car club used to visit him yearly to look at his collection of vehicles. He will be sorely missed.”

Despite living to 102, Pat’s age didn’t hold him back from forging friendships with a much younger generation. Twenty-two-year-old Edward Kelly from Fintona, who is also an American car enthusiast, said he struck an unlikely friendship at local car shows and events.

“He was a very friendly man and very approachable, and would always have made time for you,” he said. "I saw him recently at a car show earlier in the year. While he didn’t drive his car there himself, he made sure his Mini Cooper was present. He was real local character and widely known, and will be greatly missed.”

Also present at the auction was Lifford man Gabriel Clarke. A friend of Pat’s for some 10 years, he attended his 100th birthday party in 2016.

“I knew Pat for around 10 years, and I was at his 100th Birthday party," Mr Clarke said. "He was an avid collector with a keen eye. He was also full of life and acted like a teenager up until recently. They say this was how he lived so long!

“I could tell you many stories about Pat. A well-known tale was how he got caught speeding in an electric bicycle, which is actually on sale today. These bicycles can't go over 30 miles-per-hour, but Pat was going down a steep hill and apparently he broke the speed limit and caught the attention of a police officer.

“A police man tried to tell him that he needed insurance for the bike. Pat was certain that he didn't, and told the policeman to come back when he had proof. Pat was right - they say even the police couldn't get the better of him!

“He was a true local character and this collection is his life's work,” Mr Clarke added.

All that glitters is gold for new local business