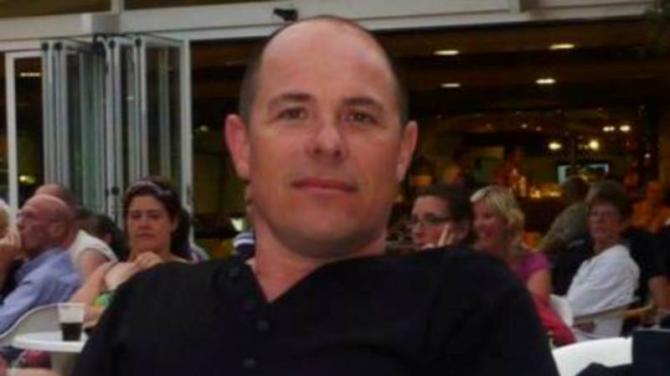 A soldier who miraculously survived the Ballygawley bus bomb atrocity of 1988 is bravely preparing to return to the site where he suffered life-threatening injuries this weekend.

Englishman Private Dave Hardy, then only 21, was returning to his Omagh base after a short break to his North East home when the bus he was travelling on was destroyed by an IRA bomb in the townland of Curr, near Ballygawley, in the early hours of August 20.

Eight soldiers, aged from 18 and 21, attached to the Light Infantry Regiment, were killed.

Dave, now 53, had been sleeping at the back of the bus when the bomb exploded and he can distinctly remember the harrowing cries of his friends and colleagues in the dead of night, before he was helped into an ambulance by a bandsman and whisked off to hospital, where he would spend the next number of months.

He suffered polytraumatic injuries including bleeding of the brain, a collapsed lung as well as a shattered ankle, broken ribs, a broken arm - and spent weeks in a coma.

Dave - who would later marry and have three children - has never returned to Omagh since that fateful night, but this weekend he will attend a reception hosted by victims group South East Fermanagh Foundation (SEFF) as part of Remembrance weekend, where he will be reunited with old friends and colleagues as well as members of the public who helped save his life.

Over the years, SEFF's director Kenny Donaldson has been re-connecting surviving soldiers and members of Omagh Protestant Boys Flute Band, such as Gordon Burnside, and Star of the Valley Flute Band, Limavady, who provided aid to the dying and injured young men on that fateful night.

Along with Bristol man Mike Drew, Dave will be making the trip for the first time and during their time here, the men will also pay a highly-emotional visit to the site where they almost lost their lives.

Dave hopes he can plug some gaps.

"I only remember leaving the airport and nothing after that, until I came around on the road," said Dave, who chose a seat at the back of the bus and as it had been a long day of travelling, had spent most of the journey sleeping.

"I remember lying there, and it was either rain or blood running into my eyes. I was totally confused, but I wasn't in any pain. I'll never forget the crying of grown men and boys - I never want to hear it again.

"After that, nothing. I don't remember anything for the next few months, until I came out of the coma."

Dave's parents were rushed to Northern Ireland to visit their seriously wounded son at his bedside and he accepts it's a miracle he survived the atrocity. In particular, he owes gratitude to Star of the Valley Flute Band member Grace Curry and her late husband, who he believes waited with him until the ambulance came.

Year after year, Dave ignored the invitations to return to Northern Ireland - but now he feels he is ready and he will finally get to meet Grace.

"No matter how heart-wrenching it's going to be, I just want to do it. I want to bury some ghosts, basically," he said.

"I would like to find out more when I meet Grace. I have lots of questions to ask her. I believe her partner waited with me until the ambulance came. I would liked to have thanked him.

"I was conscious and laughing and joking with the nurses when I arrived at the hospital in Dungannon, but I don't remember that. I believe I was the first one to be transported from the scene.

"Doctors worked on me night and day. The emergency team were fantastic – I'm really grateful to them. I 'died' a number of times - I had to be resuscitated at least four times.

"It feels like a long blink. When I finally came round from my coma, my parents were sitting at the end of the bed. I was very confused."

Dave still lives with the trauma - both physically and mentally as he admits he still has sleepless nights.

"The pain in my left leg gets that bad at times that I need a medical walking boot. I've been left with scars all over my body - people ask me how I got them when I'm on holiday - you see people looking - and I'm not afraid to tell them.

"I used to try to avoid watching the television, newspapers.

"I used to go to the beach at South Shields, not far from where I live, and I sat there all day, week after week, just processing what had happened. Then one day I got up after an hour and I realised I didn't need to do this any more. That's how I dealt with it mentally.

"But I still think about the bomb every day. I lost three of my close friends who I roomed with. When August comes around, I wake up in the middle of the night with cold sweats - night terrors. I toss and turn all night and wake up exhausted."