Bert marks his 80th birthday in a way he won't forget! 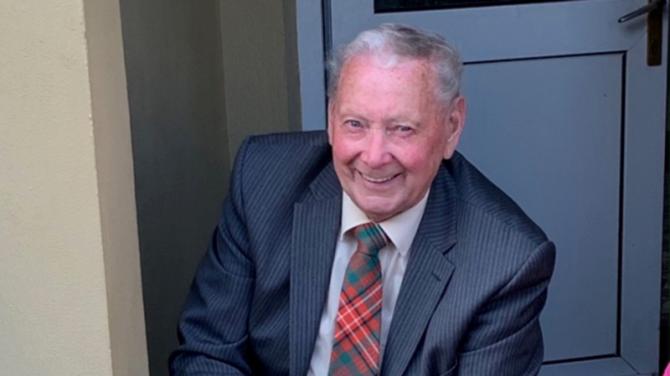 On Sunday, Mid Tyrone councillor, Bert Wilson, celebrated his 80th birthday - and thanks to the current coronavirus outbreak, it was an occasion he won't forget!

Mr Wilson's family had intended to mark the milestone in Fermanagh, but due to the social-distancing measures currently in place, a low-key event was held at his home in Fintona instead.

However, it was still a special day for the Ulster Unionist Party representative, who has now served on the local council for almost 20 years.

The weather stayed dry and warm to allow some family members to join in with the celebrations at a distance - even if handshakes and hugs were forbidden!

"We had a great evening outside the house. The pipe major, John McKinney, from Blossomhill Pipe Band - which I have been a member of since I was seven-years-old - provided music.

"It was also my daughter Laura's 30th wedding anniversary - she married her husband Rev Rodney Beacom on my 50th birthday - so it was a bit of a joint celebration!

"Weather-wise, it couldn't have been better. Had circumstances been different, we would have had more friends involved, but with the limitations, at the moment it just couldn't happen."

Mr Wilson is a former member of the B-Specials and the UDR - and was even a bus driver for almost two decades, serving the school at Tattysallagh as well as St John's in Dromore.

But he has always been happiest when farming and thankfully he remains in good health to help his son Norman and grandchildren with the animals - in fact, he was even feeding his calves on the morning of his birthday!

"Farming has always been my life. I grew up on the farm just outside Fintona and I walked to Denamona Primary School every day. I then went to the Academy for two or three years. At that time they had started the agriculture course at the local tech and I thought there wasn't much point of me learning French and Latin to speak to cows! So I studied agriculture and I learnt a lot, and it's still a benefit to me today.

"When I bought sheep at that time, you could nearly have always guaranteed I would have doubled my money. You could have made a decent living, but times were different back then. People grew basically all of their own food. Things are totally different now. Farming is in the blood - and if you are hoping to become a millionaire you would be a long time trying."

This week sees the commencing of Fermanagh and Omagh District Council's online meetings and Mr Wilson, who has rarely missed a night since he was first elected in 2001, fully intends to be involved.

It was this positive approach to life that encouraged Mr Wilson to stand as a councillor 19 years ago.

"Along the way, I think I have done all I can to help all sections of the community," he said. "It is really pleasing to drive around the countryside and see the great number of people you have helped over the years.

"It's a job I greatly enjoy - I take great satisfaction in helping people and sometimes you have to fight long and hard, but I always keep plugging away. There have been very few instances in which I have been beaten, I normally get through it some way. It is an honour to represent Mid Tyrone."