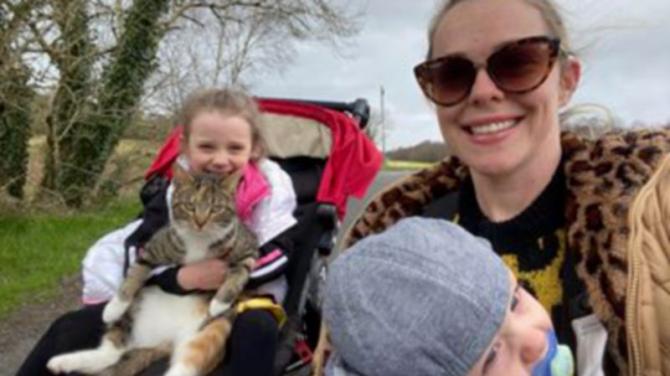 For a moment, Seskinore woman, Aoife Kerr, had visions of her children bursting through the door in a similar fashion to the BBC correspondent whose TV interview went viral.

Professor Robert Kelly and his family became a global hit in 2017 when his children gate crashed a live interview he was doing with the BBC.

Now working from home in her role as a family solicitor, Aoife - who is employed with McGale-Kelly - describes the moment she experienced a fright of similar embarrassment.

Normally based in her Omagh office, Aoife has set up a workstation in her conservatory and rather than travelling to court, she has been using an online video-link system to deal with a small number of urgent cases remotely.

While Aoife has found the online system to be an effective way of working, it has brought its own challenges, especially as she is trying to juggle her full-time job with looking after her two children, Rosa, four, and Conan, nine months.

"I hadn't tried the online court system before so I signed in to do a test," explained Aoife.

"For whatever reason, my wee girl was dressed up as Wonder Woman! She was climbing on my back and when I linked into the system, it immediately zoned into the court system and another case was ongoing. I was trying my best to cancel, cancel and cancel, otherwise my face and Wonder Woman would have popped up on the screen!

"So I've had to explain that when mummy is working she can't come in. It was a near miss."

Aoife is still trying to get used to working from home while caring for her children.

"It's a difficult time for the children," said Aoife. "She has gone from having all her own wee friends and having routines. We used to go away most weekends to do nice things and we haven't been able to do that recently.

"My wee boy sleeps a lot and is more relaxed. Rosa needs to be entertained because she's gone from a play school setting to being stuck with me 24/7!

"It's a challenge trying to juggle it all. I find doing work early on, having a blast around 6am, helps, sporadically throughout the day, and then when I go to bed in the evening I just go back to it again.

"Calls still come through to us from the office. I could have my wee girl out on the swing and I'm trying to give advice to someone on the phone! People are very understanding though."

Considering her age, Rosa has a firm understanding of the situation.

"She hasn't pushed the boundaries and doesn't ask to go anywhere. Sometimes she says she wishes the virus would go away and she is planning to do things when this is all over. For four years old, she seems to have a very good grasp of why things are the way they are."