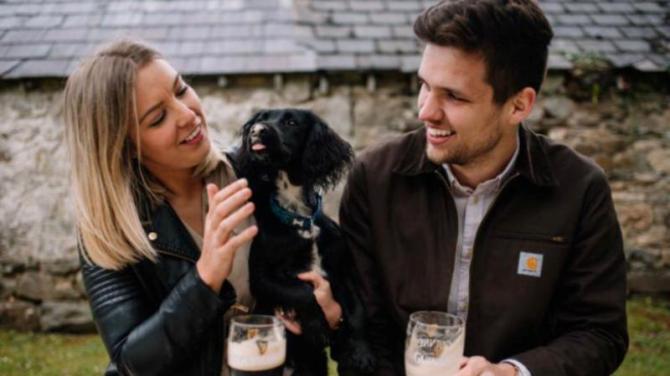 A local couple who were due to get married on Friday are instead swapping champagne for Powerade, high heels for trainers and a veil for a sweatband.

Amy Edgar, a nurse from Omagh, and Castlederg man and well-known Ballymena United footballer, Adam Lecky, had been planning their 'Big Day' at the Killyhevlin Hotel, Enniskillen, for almost two years.

However, due to the Covid-19 outbreak, they have had to postpone their wedding until next year and instead they will spend the week preparing for an event of a very different nature... and all for a great cause.

To raise money for Marie Curie and Aware, the couple will complete a 5k every hour alternatively on the treadmill in Amy's garden over a period of 12 hours to clock up 60km in total.

"We wanted to do something to take our mind off the wedding," said Adam, who is also a former player of Dergview FC.

"That developed into taking on a challenge that would raise as much money for charity. It will definitely keep us busy instead of feeling sorry for ourselves!"

The couple have already raised £2,500 for the two charities combined so far.

"Marie Curie and Aware are both very worthwhile charities - Marie Curie have helped out a lot of people over the years and pretty much every family has availed of their help at some point. I know it's Mental Health Awareness Week this week and at this time in particular, I know people have a lot of anxiety and may reach out to charities such as Aware," continued Adam.

"It's been crazy how generous people have been; we started off with a target of £500. It has been building up all week and we have been blown away by the response."

Adam will start his run between 8am and 9am and Amy between 9am and 10am until they have run a combined total of 60km.

"It's going to be pretty tough but we will give it a go and we are comforted by the fact that if the worst comes to the worst we will be able to walk or crawl the last couple of 5ks!"

It has been a particularly busy time for Amy, who is a nurse at the Royal Victoria Hospital, Belfast.

"She has been helping out with the Covid-19 wards in pretty much every hospital at Belfast. In the last month or two, she has helped out at the City Hospital as well as the Mater Hospital. She doesn't complain much. The NHS staff are heroes and I think they're still not getting enough credit and I have nothing but respect for them."

For Adam, 28, who is a talented forward for David Jeffrey's side, it will be a good way to burn off energy following the suspension of the Irish Premiership season.

"I'm really missing the football. We weren't going through the best of spells at Ballymena when it stopped so the first week or two we were pleased to get the break to try to re-focus, but obviously that has now turned into two months. You don't realise how big it is in your life until you don't have it, so fingers crossed it could be back soon."

If you would like to donate to Amy and Adam's cause, visit https://uk.virginmoneygiving.com/AmyEdgar2