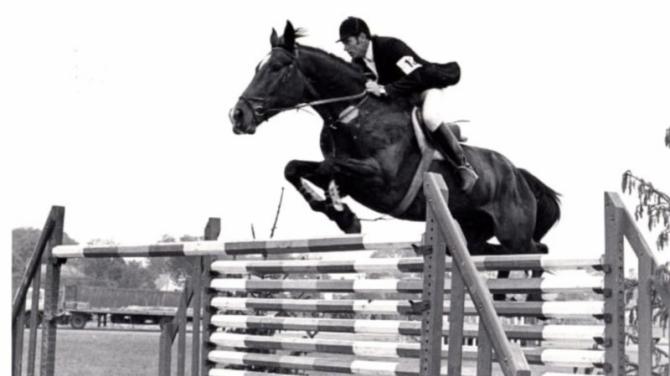 THE family of Seskinore man and former international showjumper, Ronnie Smith, who was laid to rest yesterday (Tuesday) following a short illness, have paid tribute to the man they describe as "an inspiration".

Growing up on the family farm close to Augheronan Stud, Mr Smith's interest in horses and ponies began at a very young age and his hobby took him all over the UK, Ireland and Europe in the quest for silverware.

Although Mr Smith began his successful career racing horses, winning the Ulster National title on what was probably his best horse, 'Gaybrook', it was showjumping where Mr Smith really excelled.

Amongst his highlights was representing Ireland on his renowned horse 'Onward Bound' at the world-famous Aga Khan Cup at the Dublin Horse Show in 1976.

He also recorded success at the puissance competition at Micheroux, Belgium, where he jumped 7'2 - a record he held until recently.

Closer to home, Mr Smith won the Grand Prix at the Dublin Spring Show in a major victory against good friend and competitor, Tommy Brennan on 'Grey Slade'.

"Horses were his passion and his life," said his son Eric.

"He was very much a family man and after his jumping career, he would have mentored every one of us and we've all jumped up to Grand Prix level.

"He had a huge influence on all of us - he was a fantastic mentor and trainer."

A close family friend, Sandra Low Mitchell, said the island of Ireland had said goodbye to "one of the best horsemen and characters in the equestrian world."

"Ronnie’s interest in horses started with the work horses used on the farm by his grandparents," said Sandra.

"His devotion at an early age led to him getting his own pony and his goal was always to jump at the Dublin Horse Show.

"He spent hours reading books about horses and learnt as much as he could. By the age of 15 he had two good ponies that he had started from scratch and finally he was ready for the Dublin Horse Show.

"Travelling there by train with the ponies, he competed successfully, so much so that he sold both his ponies at the show and from there his career path was laid out!

"Possibly his riding career was cut short due to the fact he had a handful of very talented sons coming behind him and all wanting to compete. However, when Eddie Macken suggested to him one day when Ronnie was 48-years-old - 'if I had that many good jockeys coming behind me I’d be hanging up my boots' - Eddie was told he was not ready for that!

"With a number of sons to keep in horses, Ronnie was then having to breed plenty of stock.

"Ronnie kept riding until very recent years - around the farm checking on things. There was not much that missed him. An encyclopaedia of knowledge, I always thought of Ronnie as the 'W man' - steeped in wisdom, full of wit, always at work. And if you ever wanted to know who, where, when, why or which then Ronnie was the man to ask."

Paying tribute to Mr Smith, the Rev Robert Orr said: "You could say that Ronald’s life and passion was competition and the Augharonan Studd. But it was not only a passion for himself. Ronald was a great mentor and coach and he excelled in passing his knowledge on to his children.

"They too had acquired a passion for horses as they journeyed all over with Ronald and Margaret as they went to events – staying in a caravan they towed behind the horsebox.

"This led in turn to them reaching and competing and achieving success at the highest level in the sport – something Ronald took real pride in.

"It is no surprise then that the next crop of apples hasn’t fallen far from the tree because whether it was planned or not in pursuing his passion, Ronald and Margaret were investing time in their children – something that wealth, money, fame or privilege can never buy. And as they spent time together, they grew as a family.

"Ronald lived life to the full – even when he faced illness he was determined to continue to live life to the full because he loved life and it has led him to leave behind a rich legacy of achievement on the Hill, in his marriage, in his family and through his passion of horses. Such lives are rare, and they should be celebrated not mourned."