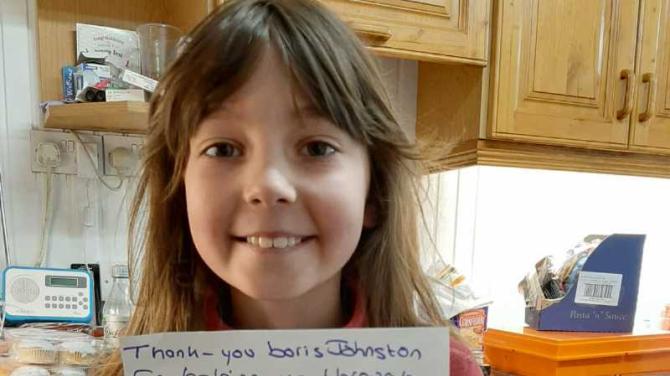 In the midst of a global pandemic, you would imagine the Prime Minister is up to his eyes in paperwork - but Boris Johnston still had the time to respond in writing to local girl Emily Crozier, much to the delight - and surprise - of the McClintock Primary School pupil and her family.

Nine-year-old Emily had sent a heartfelt drawing to Mr Johnson when he was unwell with coronavirus and although she was hoping a letter may come back from the Prime Minister, she never got her hopes up.

But on Thursday past her dreams come through when she excitedly opened an envelope in her name. Inside the envelope was a photograph of Mr Johnson holding the very same drawing she had sent him with a letter which said: "Thank you so much for the wonderful message and good wishes you sent me when I was unwell.

"The letters and cards I received really cheered me up. As you may have heard, I'm back in 10 Downing Street now and feeling much better.

"Thank you also to you and your family for all you are doing to keep yourselves and others safe. Best wishes, Boris Johnson, Prime Minister."

"We thought there would be nothing more about it after she sent the drawing," he said. "But when the letter came back Emily couldn't believe it, she just ran around shouting!," Joe laughs.

"She was very excited about it and it meant a lot to her, because every day she was asking if there was any post. It is very pleasing for her - and she is as happy as could be."

Joe, who owns the Village Store in Seskinore, said Emily had been very helpful to her family in the grocery store since the lockdown began. She has been keeping in contact with her friends through video calls and they were also very excited to learn about her correspondence with the Prime Minister!