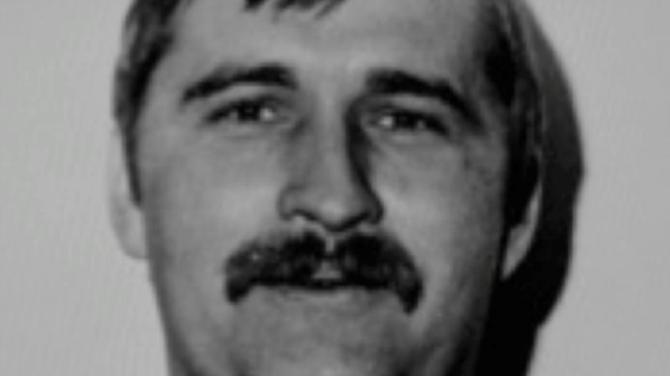 A woman whose husband was murdered by the IRA almost 40 years ago has demanded the UK Government show war widows "respect" by reinstating their pensions.

Castlederg man Ronnie Finlay was shot dead by the IRA when leaving his job at the former Adria factory in Strabane on August 23, 1983.

He was 32 and had three young children, aged between nine years and nine months.

His widow Elizabeth Morris got a military pension after his death but, like many other UDR widows, the pension was withdrawn when she remarried.

Elizabeth said: "I lost my husband 37 years ago in 1983. He was coming home to me and the children from work when the IRA ambushed him leaving me with three young children - aged nine, six and nine months.

"I will never forget that terrible day. There were a lot of lonely days and dark nights ahead for me and I didn't know what to do. With the help of my doctor, my family and friends, they helped me through it.

"When I met my second husband, we planned to get married only to be told if you marry you will lose your war widows pension - how disrespectful was that?

"I'm 67 now and not getting any younger. I would say to the government - do the right thing and respect all widows the same. There is no difference in any of us.

"Enough is enough. Us war widows have been through it, and we need the respect now and reinstate our pensions.

"If we were to get our pensions back, it would be great for our widows. It would give us that respect."

Her call is supported by victims group South East Fermanagh Foundation (SEFF) who this week have been running a campaign from six different widows affected across the province.

SEFF’s director of services, Kenny Donaldson, explained: “The campaign has been a bottom up initiative. War widow Susan Rimmer had led the charge along with approximately a dozen other war widows and with the support initially of former MP Greg Mulholland (Liberal Democrats), we have stood with them and have sought to make their case robustly.

“Thankfully the War Widows Association of Great Britain have been behind these widows in recent years to back their plight and to campaign for appropriate recognition.

“In November 2018, five of SEFF's members had their testimony relayed by Julian Lewis MP within a Parliamentary debate. If the UK Government were under any doubt prior to then as to how deep the issue runs then they certainly should not have been under any illusion post that debate.

“Yet 18 months on from that point there continues to be a lack of resolution to the issues - this is a national scandal."

Mr Donaldson said the UK Government position to date has been unacceptable, adding: "The policy of removing pensions was anti-family and anti-marriage and was shameful.

“Trotting out the familiar and overused line that pensions cannot be provided retrospectively does not hold water. We need creative thinking from Government around putting this matter right, find the mechanism to support a cohort of women who have been treated in a manner not fitting to the service and sacrifices they and their loved ones made on behalf of this nation.

“We demand more than patronising sympathy for the widows impacted, we need positive action.

“The answer is there for the UK Government; we need a one-off compensation arrangement for widows who have been disadvantaged through not having access to their pension for the years in question and the second requirement is the immediate restoration of the pension.

“SEFF has engaged with the Defence Minister (present and past) with the Treasury, MPs across Parliament and Lords in the Upper House and we have also repeatedly raised the issue with local political parties.

“There is no justification for inaction on this issue, with each day that passes war widows are getting older and a number have departed this life without ever seeing a grievous wrong put right."