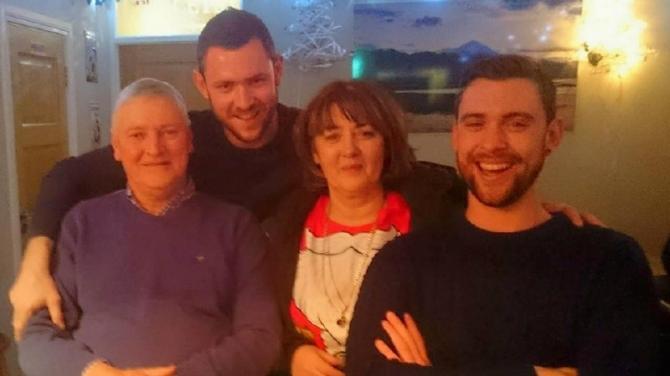 The coronavirus outbreak has been particularly cruel on Sixmilecross man, Patrick McGarvey - but on Father's Day, his family gave him a great surprise.

Mr McGarvey, now of the Dublin Road, Omagh, has been in the South West Acute Hospital, Enniskillen, for several weeks recovering from an infection, and due to the current coronavirus restrictions, he has not been able to see any of his family. As a big family man, this has taken its toll on him.

So, to mark Father's Day, his son Tomas gained access to the grounds at the South West Acute Hospital with a large handwritten message which delighted Mr McGarvey, 72, who read it from his hospital bed window!

"Dad was diagnosed with cancer in October 2018," explained Tomas, who normally lives in London but is currently staying with his mum Eilish during the coronavirus pandemic.

"He had an operation in April last year followed by radiotherapy - he wasn't suitable for chemography because of underlying health concerns and historic heart problems.

"The operation by all accounts seems to be a success as the cancer doesn't seem to have come back in any way.

"However, radiotherapy took a significant hold on his quality of life and he has been subject to quite a few infections.

"He has been in hospital four times since Christmas and most recently for several weeks. Obviously due to the COVID-19 outbreak, he hasn't been able to have any visitors.

"It affected him in a way that his previous visits to the hospital hadn't because we would have visited every day. We understand why he can't have visitors - and they are put in place to protect dad, but it has a negative side to it as well.

"So we went up to the hospital last week and found his room, as dad put a towel outside his window and on Saturday evening we went up with the banner. It was quite funny as my brother James, in England, called my dad to tell him to look out of the window.

"When he saw me, he started waving - but there were several dozen nurses waving back at me from every window I could see!"

Mr McGarvey has been like a 'celebrity' in the hospital since, according to Tomas. "Everyone wanted to know who the banner was for, and when he can't visitors, this gave him some visitors he may not necessarily have had. He has been on a bit of a high all weekend."

It was a highlight in what has been a very challenging year for McGarvey personally. Just recently, he lost his brother-in-law, Jim Franey to cancer.

"He had been through treatment with his brother-in-law - they had been diagnosed just a couple of weeks apart," continued Tomas. "That was quite difficult for everyone in the family.

"Dad wasn't able to make it to his funeral in person - but he was able to watch it via videolink. A lot has happened since he has been in hospital."