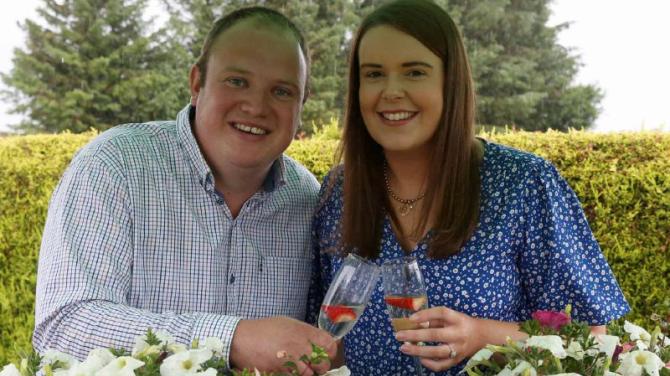 Rachel Monteith and her fiance, Adam Wilson, were feeling pretty deflated on the morning of  Friday June 26. The couple were supposed to be putting the final touches to their preparations to their wedding day on Saturday, but obviously due to the coronavirus restrictions, their big day - which they had been planning for two years - had to be postponed.

But that evening, Rachel, from Castlederg, and Adam, from Dunmullan, received a phone call that would transform their mood - and change their life.

Rachel, 25, had entered Cool FM's 'cash call', sending a text message in the hope of winning a mega £25,000. She had thought nothing more of it, and even had her phone set to silent.

When she felt her phone vibrate in her pocket shortly after 5pm, she had no idea Cool FM's John Kearns was on the other end. She answered, even though the call was from a withheld number and to her astonishment, she recognised the voice from the radio.

The lucky caller is asked to remember the winning cash total and Rachel had only entered because it was an "easy to remember, round number", she laughed.

"With the wedding originally due to be held the next day, I thought I would enter just to see," added Rachel, who is a nurse at Omagh Hospital and Primary Care Complex.

"It was a huge shock to receive the call.

"I had to look at Adam and I don't think he knew what I was talking about, because I was trying to ask him was it definitely £25,000!

"The stars must have been aligned. Earlier on Friday, we weren't in great tune, but to receive the call definitely picked us up!"

The win couldn't have come at a better time for Rachel and Adam, who had been planning their honeymoon and building a house in Dunmullan. They also hope to treat family and friends with the money.

The couple has postponed their wedding to May next year, with the service taking place in Killeter Presbyterian Church followed by a reception at the Silverbirch Hotel, Omagh.

Thanks to this lucky phone call, they can do so with a little extra money in their bank!