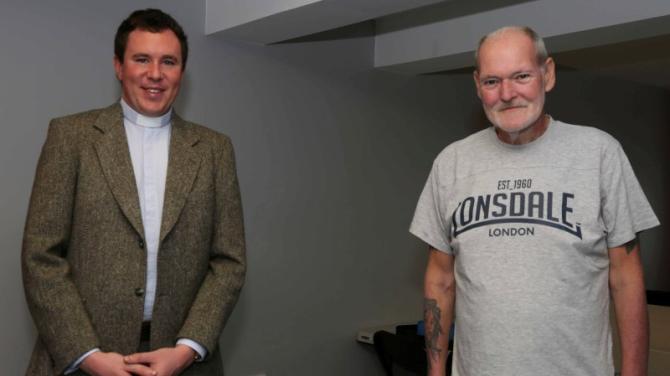 A BRAVE and inspirational Omagh man has spoken out about his struggles with mental health in a bid to try to encourage others in the same situation to seek help.

After being diagnosed with a serious illness, Brian Maclaine lost his appetite and his motivation for life, as depression took a serious hold of his health and well-being.

His family grew increasingly worried about him as his weight-loss spiralled out of control, dropping from 16 stone to 10-and-a-half in a relatively short period.

The illness had affected his quality of life, and Brian's mood was severely impacted.

When he opened up to his family, they advised speaking to a counsellor and with the right support, Brian said he is now in a much better place.

"I had been going through a hard time with an illness and my head wasn't in the right place," Brian told the Tyrone Constitution.

"My mood just went down and down, and down. I had good days and bad days, but I was having a lot more bad days than good.

"I wasn't eating, I was losing so much weight. I was thinking that if I stopped my medication then the whole thing would soon be over - worrying thoughts.

"I put my family through a hard time. They got together and organised a meeting with my brother-in-law Gordon Buchanan (of Wave Trauma Centre).

"I broke down to him and he told me he could get me help, and he organised counselling for me once a week. It was the bravest thing I have ever done.

"Counselling has really helped, and that's what I want to get across. There is help out there - there's the Samaritans, the churches, there is so much out there. Make use of them, because that's what they are there for. They want your calls and they want to help in any way they can.

"It has really helped me - I have had the best five weeks in a year - and it's bound to help someone else."

Thankfully, Brian's appetite has improved and he is now putting on weight again.

"I have been really upbeat for the last five weeks, it is a remarkable turnaround. I would probably put that down to my counselling. I still get upset some days and have a good cry sometimes, but that's just the way life is."

Exercise, too, has helped Brian. Inspired by some friends who have been taking part in the daily 25 press-up challenge on Facebook, Brian has been doing star-jumps every day.

"I wouldn't have been fit to do press-ups, so my daughter told me she would help me do star-jumps," said Brian.

To show his support for Wave Trauma Centre, Brian decided to take the plunge and have the beard he had been growing for months, shaved.

The money raised is to be split between Wave Trauma Centre and Military and Police Support of West Tyrone (MAPS).

"I asked on Facebook a while ago whether I should keep it or shave it off, and the vast majority said to keep it," explained Brian.

"I decided to take it off, though, for two charities close to my heart - Wave and MAPS."

And that's what he did. On Friday, at GK House, encouraged by fellow members of St Columba's Church, Omagh - some of whom watched on social media - Brian's beard was shaved - and all for a great cause.

"Brian has been a real inspiration to people within our church community and the wider Omagh area," said Rev Sean Hanily.

"I got to know Brian when I moved to the parish and one of the privileges of the job as a clergyman is that you get to walk with people who are going through tough times, and it has been really encouraging for me to see how Brian has dealt with this.

"His faith has been a strong part of his struggle and indeed his recovery, and we are very proud of him. Not only has he raised funds for two very deserving local charities, but he has given people encouragement to speak out and get the help they may need."

If you would like to donate to Brian's cause, visit: