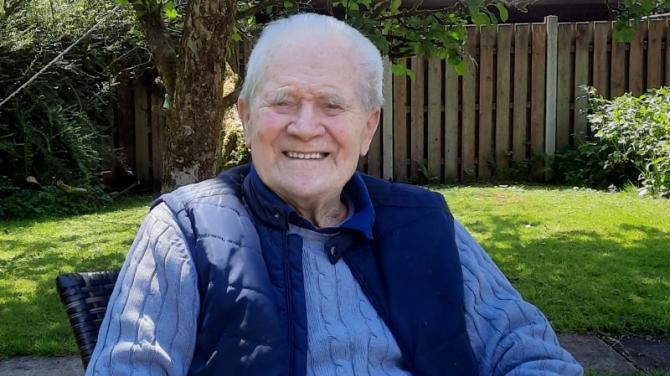 Omagh man, Vincent O’Reilly, from Richmond Park, marked a special birthday on Friday surrounded by a few of his close family members.

Born in the Derries near Killeshandra in Co Cavan in 1919, he was one of a family of 13. Two of his brothers were, JohnJoe (the gallant JohnJoe), and, Tom who were famous Cavan footballers, seeing Cavan through to all Ireland glory in 1947 in the Polo grounds in New York. Vincent also liked football but decided to concentrate on his farming career instead.

Vincent married Margaret Taite from outside Virginia County Cavan in 1954 and the couple had planned to emigrate to Australia and initially decided to move to Northern Ireland. Vincent had purchased a farm at Tonagh situated between Fintona and Trillick, and, as Margaret and Vincent liked living and farming there they decided not to go to Australia.

Margaret and Vincent had six children, Mary who lives in Ballinasloe, Una who lives in Ennis, JohnJoe who lives in Collon, Twins Marcella and Geraldine who live in Emyvale and Omagh respectively, and, Brian who lives in the Isle of Man. Vincent also has eleven grandchildren and four great grand children, all of which he has a special connection with.

In 1984 Margaret and Vincent decided to sell their farm outside Fintona and to buy another farm and move to County Meath near Moynalty, and close to Mullagh in County Cavan. Vincent was 65 at this stage, an age when some people would be retiring, but instead, he purchased another farm and he continued to farm until he was 80. At 80 Vincent decided to retire from farming and this was when Margaret and Vincent moved to Richmond Park in Omagh. Here they joined the Killyclogher Senior Citizens Group and made lots of new friends, as well as re-connecting with lots of their more established friends in the area.

Vincent was always very active having farmed until he was 80 but he was also a keen swimmer, reader, and walker, who also loves readind and dancing. Vincent would have walked three miles a day, visited the gym and drove, up until he was 96. His favourite places for swimming include Rossanowlagh and Keel beach in Achill. He loves spending time with his family and in particular his grand and great grand children.

Vincent believes he is very lucky experiencing good health throughout his life. He says the secret of his good health is having everything in moderation.

Daughter, Geraldine, described her father as being a very good humoured and witty individual who is always positive.

"He always makes people smile when he is in their company, with his wit and humour. With daddy the glass isn’t just half full, its three quarters full," she said.