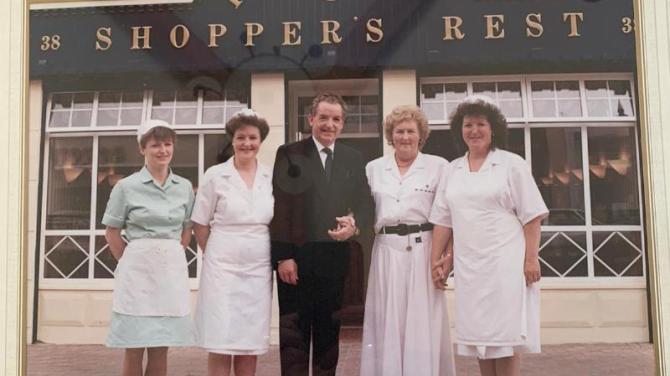 After almost three decades, Peter McAleer and his wife Anne-Marie, the owners of the popular Shopper's Rest on High Street, are to call it a day.

While the town of Omagh has been slowly coming to life again following the easing of the coronavirus restrictions, the shutters have remained closed at the busy cafe the family has owned since 1991.

That is because the couple have put the historical building on the market and plan to swap their life in Omagh for the sunny climate of Costa Blanca in Spain.

"We just thought it was the right time," said Peter.

"We have a place out in Spain and I have a job to go out to in property management.

"I lost my dad [Edward] this year and I just think it's the time for us to move on."

For the McAleer family, it will signal the end of an era, but Peter is confident the property will prove a valuable asset to whoever buys it.

"My dad took it on first when he was 60. He retired about 15 years ago and then we took it on. Now is the right time to move. The kids have all grown up and there is nothing holding us here," continued Peter.

"There has been a lot of interest [in the property] and it's a prime spot. It's a viable business and everything will stay. The new owner will just turn the key and the electric, and operate.

"There have been four or five serious people interested. But I know in the first couple of days there were 10,000 views on the listing."

Peter will spend his days in Spain looking after apartments for ex-pats and doing airport runs, in what is a completely new venture for the Omagh man.

He will miss the Shoppers Rest, however, he admits.

"We made a lot of good friends there. We had a good clientele - it was just a social event.

"We were a part of the town centre - everyone knows everyone. When daddy passed away, and when we down Bridge Street, every shop had their shutters down as a mark of respect.

"Daddy used to be there morning to night. As a man said to me, he used to be out sweeping the streets and he was nearly at Super Valu by the time he finished! He just got carried away, trying to keep the place tidy. He was a real grafter."

And he stressed the coronavirus pandemic had no bearing on his decision, although it has accelerated his plans.

"I was due to retire in six months anyway, so it was about letting it go now and allow someone fresh to take it on," said Peter.

"We could open now and start trading again, but we just think it's time to let it go. We put it up to see what interest there is and if nothing comes of it, come October we will be back in there. We won't just walk away from it - I'm in no panic."