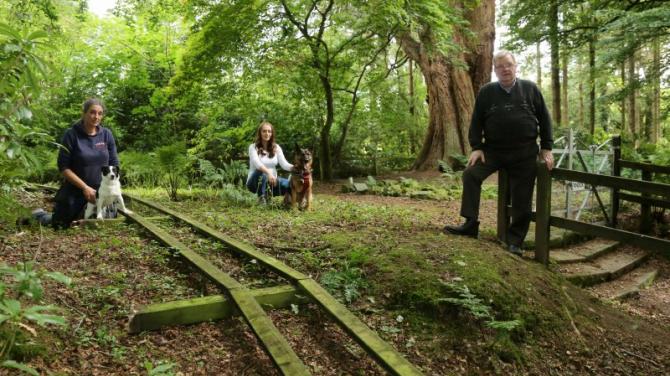 A memorial garden at Seskinore Forest Park dedicated to the McClintock family has been targeted in an act of vandalism.

The Garden of Remembrance, in memory of one of the village's most respected families, was targeted sometime over the weekend, sparking outrage from local councillor, Allan Rainey, who visited the site on Monday evening.

In 2006, the granddaughter of Colonel John Knox McClintock - who contributed much to the life of Seskinore during his lifetime, including building the local primary school, before his death in 1936 - visited the area and had a memorial sign erected at the garden.

Mrs Xenia Lewis, from Townsville, Australia, made an emotional return to the village to try to answer some of the many questions that surround her childhood.

"This was an act of demolition, it's really unbelievable," said Mr Rainey. "They have smashed down the wooden rail and scattered it all over the place.

"It wasn't an act they carried out just passing by. They have really got stuck into it, demolishing it and breaking it up, really rubbing it in. This is just real vandalism."

Mr Rainey said he had "no idea" what the motivation behind the vandalism could have been.

"The memorial setting is something really unique in Seskinore Forest Park," he added.

"I would like to ask whoever is responsible a question: Next time they have something like this in mind, would they dare dismantle the surround at their own home? Is this the type of behaviour that the dead of years ago deserve?"

Mr Rainey said the village of Seskinore is a "tranquil area" and did not need this type of activity.

"It's not the norm for Seskinore. It's definitely something out of the blue and I would appeal to those responsible to lay off. It's not acceptable."