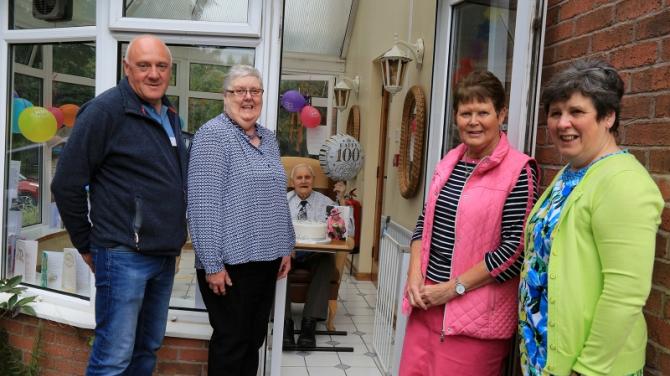 An Omagh man who recently celebrated his 100th birthday has attributed his long life to "hard work and a strong faith in God."

Stewart McLaughlin, who is a resident at Hillview Home, Omagh recently marked the impressive milestone with a socially distanced visit from family and friends.

Mr McLaughlin was born in Liscable outside Gortin on September 9, 1920. His mother and father were Frances and Andrew McLaughlin, and he was the oldest of a family of four. After leaving school he farmed the family farm and in 1951 he married Elizabeth Watson from Newtownstewart.

He then moved to Omagh and worked in Scott’s Mills for several years. They had four children, June (Lynch), Frances (Watters), Lorna (Alcorn) and son Raymond.

After he left Scott’s Mills he continued his career with Omagh District Council where he worked until his retirement. His wife died in 2007 and he moved to St Julians Fold, where he lived for approximately 11 years before moving to Hillview Lodge Nursing Home at the age of 98.

Indeed, he was driving up till this age and enjoyed changing his car on a regular basis. He has 11 grandchildren and 20 great grandchildren.

He has enjoyed good health over the years and attributes his long life to hard work and a strong faith in God.

The family would like to express their appreciation to the staff of Hillview Lodge Care Home for all their care and devotion to their father and really appreciate all they have done and are doing for him, many thanks.