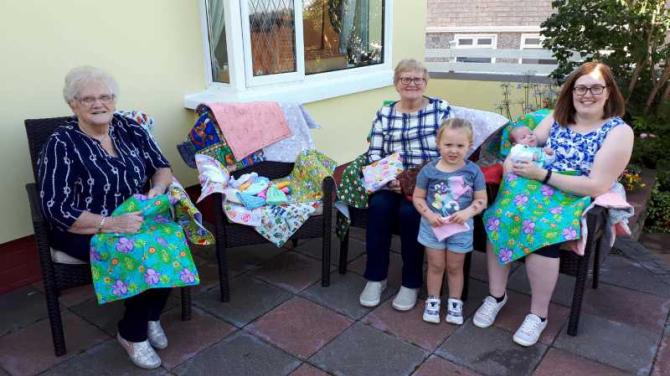 A mother from Ederney has found a unique way of saying thank-you to the Neonatal Unit at South West Acute Hospital (SWAH) who nursed her precious newborn son, William, during the first week of his life.

Jemma Milligan, with help from mum, Gwen and family friend, Valerie Wilson, have been busy sewing and stitching over 20 special blankets for the unit, which specializes in caring for newborn infants who require additional help after they are born.

When little William was born via emergency section in July, he needed help breathing.

Midwives who were in charge of feeding him began to notice irregularities in his breathing.

When monitor tests revealed that during feeding, his oxygen rate was dropping and his heart rate was spiking, he was admitted to the Neonatal Unit at South West Acute Hospital for additional care. He was later diagnosed with silent reflux.

It was in the ward that Jemma noticed the colorful blankets for the babies - and she asked ward staff if they would accept blankets she could make at home, as a way of saying thanks.

"Baby William was in the Neonatal Ward for a week," Jemma explained. "I noticed the babies were lying on wee blankets and I happened to ask the nurses where they got them from.

"I was told that people donate them and that they were always happy to accept them. They don't last long as they are boil-washed to ensure they are clean.

"We have since gotten the fabric and we have been making them since. My mum and Valerie have made about 15 so far between them. Unfortunately, William is still unwell so I haven't had that much time on my hands but I am hoping to make around ten.

"It takes around 45 minutes to make each blanket so it is a big time commitment. However, it is very much appreciated by the ward.

"I also hope to donate homemade bibs and birth cloths that I made when I was pregnant."

The Western Trust's Neonatal Units provide high quality individualised care for your infant and ensure that parents and the family are at the centre of their baby's care.

Jemma said she is very thankful to all the staff at SWAH for their critical help with William after his birth.

"The Neonatal Unit was absolutely amazing," she said. "They gave us an update every morning on how William was doing. We just wanted to make the blankets for them as a way of saying thanks.

"William had his first cry in Neonatal Unit and the nurses said that they could see his personality coming through at just five days-old. We are full of praise for their service.

"William is home now but he is still suffering from a bad strain of reflux and is still in and out of Accident and Emergency. He may need an operation in the future.

"For all new parents it is important to be aware that there's different strains of reflux, and how bad it can be. It's not normal for a baby to turn blue and it's important to get them to the Accident and Emergency department and for them to receive the treatment they require."