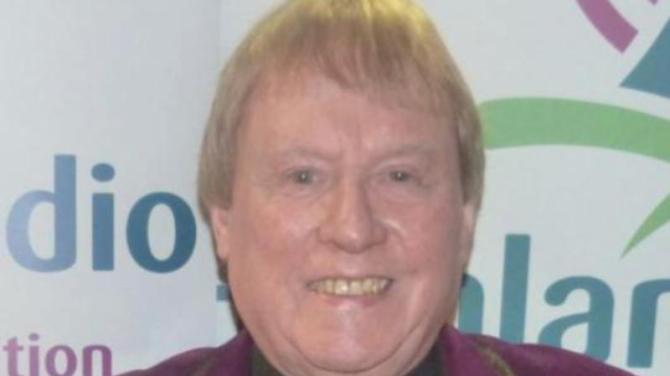 A son of Pio McCann paid a poignant tribute to his father at Monday's funeral.

Aaron McCann described his father as someone who wore his heart on his sleeve and who was a genuinely optimistic man throughout his life.

"The first lesson he taught me was that optimism is a strategy for life. He was a genuinely optimistic man and that optimism carried him right through his whole career. My dad talked to the biggest artists that the world has to offer just like they were lifelong friends enjoying a drink in a bar together. The likes of Dolly Parton, Gareth Brooks, Johnny Cash.

"He also supported up-and-coming local artists, instilling self-confidence and belief in so many people, and sometimes seeing their talent before they had the chance to see it for themselves. And once he saw it, he would nurture it, encourage it, until you yourself believed it and saw it.

"I know that because he did exactly that for me. My insecurities and fears were no match for Pio McCann. He taught me not to take life too seriously, and how to dismantle some of the curveballs that life can occasionally throw our way with humour. The same way my Dad was never afraid to be himself and show whatever emotion he was experiencing at that moment.

"My father wore his heart on his sleeve and his soul in his smile. Every time my father experienced hardship in his life, he wore it like a badge of honour, to show you that you too can come out the other side of a tough spot with a smile on your face.

"He taught me that true love has no expiration date. I can vouch that a soulmate is not reserved for Hollywood films and fairytales. My mother and father recently celebrated their 50th wedding anniversary and the most amazing thing about that isn't even the number of years and time that passed, but instead how the smile on his face didn't change in a degree every time he saw her.

"I am in awe at the strength shown by my mother over these past few days and her ability to focus in on the amazing 58 years she shared with my Dad and not dwell on what she has lost.

"Although this is a terribly sad day, part of me can't help but smile when I think of the full life my father lived and how he treated people for the full duration of the time he was here on this earth."

Speaking to the Tyrone Constitution after the service, Aaron described the funeral as the 'perfect' send-off for his father.

"I think everyone had such heightened emotions and it went so well that everyone was on such a high after it," he said. "It was perfect."

"Dad was always a wild time-keeper and wanted everything to go smoothly, and I think he would have been very proud about how it went off. Everything that could have gone right did go right, even the weather.

"It was a very fitting send-off. It was just so fitting for his life. Everything was there. It was family-based, entertainment-based. It was tied into his life so well."

Aaron said Philomena Begley, in particular, "sang so well". "The emotion in her voice was beautiful," he added.

"Garth Brooks and Trisa Yearwood both got floral arrangements from Nashville for Dad's funeral and wrote on a card: 'Distance doesn't matter between friends'. Daddy had interviewed Garth Brooks and obviously had a lasting effect on him.

"We were all saying, if Dad had been here for his own funeral he would have enjoyed it so much. And that's the main thing."