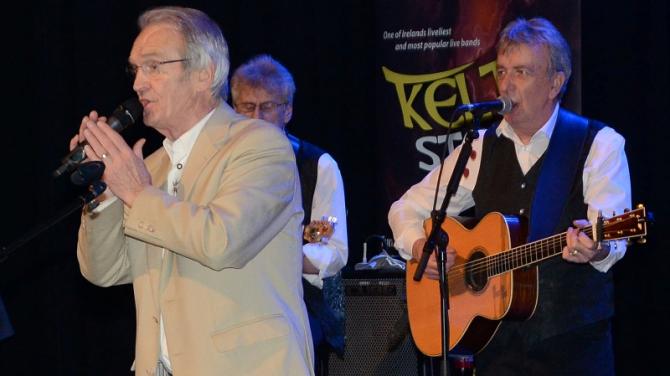 OMAGH will be a much poorer place without Brian Coll, said fellow musician and friend Tom Sweeney.

Like Mr Sweeney, Mr Coll was from the Gallows Hill area of the town and the songwriter and story-teller has fond memories of his late friend.

"He was the first famous Omagh person that I can remember," said Mr Sweeney.

"Brian was a terrific singer, and he was the first man I can remember hearing yodelling live - he was a great yodeller.

"He always had a great love of the town, he knew the town imminently, and he had a great knowledge of the place. Even up until last week, you would have seen him out walking the roads.

"When you met Brian, you knew you were in for a good hour's conversation of fun. He had a great sense of humour. He was just a master entertainer.

"He will be very sadly missed by the people of Omagh. He was a big star of his time, but you wouldn't have thought it. He was just Brian Coll from the Hill. He was very down to earth, he knew everyone and everyone knew him.

"Omagh will be much poorer without him.

"I always say that music breaks down all barriers and Brian just loved music, and his fans loved him."

Mr Coll helped to put Omagh on the map, according to Mr Sweeney.

"Back in the '60s and '70s, Omagh became famous as Brian Coll's hometown," Mr Sweeney continued.

"He came from a very illustrious family as well. His uncle was the writer Benedict Kiely, the novelist and short-story writer, and his daughter, Sharon Owens was also a best-selling novelist."

To lose Arty McGlynn, Pio McCann and Mr Coll within a year is a bitter pill to swallow, said Mr Sweeney.

"Arty and Pio both played in Brian's band, so it's just very sad that over the last year all three of them have passed away."

Fellow singer and Omagh man, Dominic Kirwan, was a close family friend of Mr Coll and he has been left devastated by the news.

"We go back a long way, we were family friends first of all," said Mr Kirwan.

"From a very young age, he would have been in and out of my home when he was in his heyday. I got to know him as a friend and professionally.

"We are very saddened by his sudden loss. We all knew he wasn't well and that he was about to start treatment, but there was always hope that we would have got more time with him. Sadly that wasn't the case and the good Lord had other ideas."

Mr Coll could have had a successful career in the United States, but chose to base himself in Ireland for family reasons, according to Mr Kirwan.

Omagh has produced many great musicians and entertainers, Mr Kirwan said, but Mr Coll will always be remembered as one of the best.

"The Plattermen are one of the most popular bands Ireland ever produced," he said.

"For him to then front his own band - the Buckeroos - from that... Brian stands up there as probably the number one country singer in his style of country. I would most definitely back that up because I just loved to hear him singing. He was something very special."

As a person, Mr Coll was "good with people, did a lot for charity, and he will be a character around Omagh that will be missed," continued Mr Kirwan.

"He was very approachable," added Mr Kirwan. "He was a great story-teller and had a great memory, he was very funny."

Country singer Nathan Carter said he was "honoured" to have shared the stage many times with the great singer.

Mike Denver paid tribute to him, tweeting: "RIP Brian Coll. One of the greats. I had the great privilege of touring with Brian a few years back. A pure gentleman."

Daniel O'Donnell described his friend as a "great singer and a lovely person."