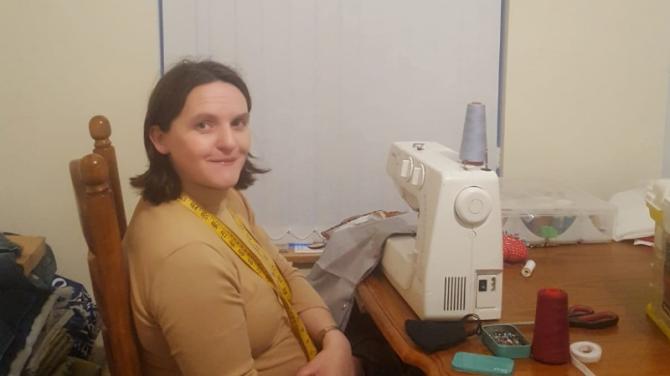 WITH the work of NI Scrubs closed, the titanic effort by all involved has left them reflecting on what the army of sewers and co-ordinators, including Beragh volunteer Briege Woods.

The much-needed response to the Covid-19 crisis saw Briege Woods among the army of sewers, cutters and many more swing into action, in the end making 106,000 scrubs.

"I had retired on health grounds a few years ago and had started getting back to doing things,” explained Briege.

"I’d just bought a new sewing machine and started a sewing class in Belfast. Obviously, this stopped because of Covid so this was a way of using my new machine."

It had been three decades since she had been cutting and sewing, but she was quickly into action.

"I hadn’t cut out patterns for 30 years but I answered the call – there were seven or eight of us at the beginning," she said.

"I was to cut and somebody else would sew, but it escalated so much that within two days I was standing in a car park at Kelly’s Inn in Garvaghy picking up five rolls of fabric to sew."

That wasn’t the end of the challenges.

"I realised that I had no pattern so I collected a pattern the next day and got my sister and sister in law involved too," Briege said.

"I did the cutting and they sewed but I ended up sewing as well. We all got quickly caught up in it. I spent hours every day sewing.

“I’m such a perfectionist that I was quite slow, but I did this right through to mid-June. The delivery meant that everything came to me and then I delivered to my sister and sister in law. Everything was then packaged up and delivered to a delivery point in Omagh.”

NI Scrubs was the brainchild of Clara Maybin at the start of the first lockdown, when nursing and care staff were facing shortages, it grew from an appeal to become an army of 9,000 sewers, including Great British Sewing Bee contestant, Angeline Murphy.

The work of everyone involved has left a lasting legacy, one which Briege wants to make sure is remembered.

“At the beginning of March, I thought this was going to be very big,” she explained. “At the start there were eight people, then it quickly went to 90, then the 100s. I think it ended up with 9000 odd people.

“I noticed that a lot of people were putting up pictures of their work online so I thought it would be great to make a photobook of the stories to capture a wee bit of history.

“I got permission from Clara and spent an hour every night screen-shotting and editing photos. I then made a photobook of them – showing the beautiful work that we were doing in Northern Ireland. I had them printed in batches of 20 and sold more than 60. I also gifted some of them to the library. In total I raised about £400 for local charities like Women’s Aid and Marie Curie.”

Clara Maybin reflected on the sheer immensity of what they took on: “When I sit and think about it, it is madness,” she said. “When I think of how tough it was it is very overwhelming.

“Every day got harder and harder, as more messages came through it was very hard to manage. And getting fabric to people up and down the country was so hard during the lockdown.”

And the work of NI Scrubs is something Briege will long remember: “Being involved brought a sense of achievement during a time when the world was in lockdown. It brought out the best of people in Northern Ireland.”