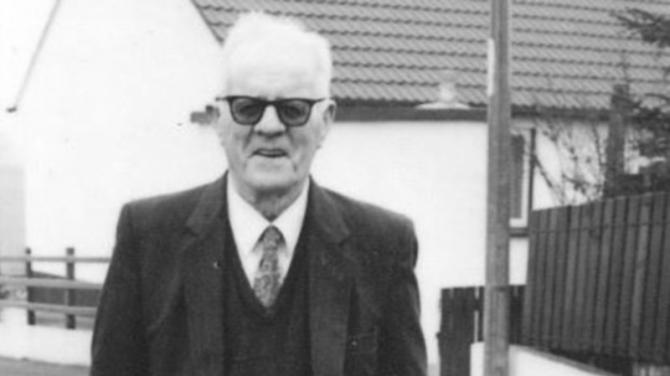 DRUMQUIN and West Tyrone will have a special treat this Christmas with the launch of a DVD and publication of 50 songs and poems written by the late Paddy Harpur. This is a package that will be in demand in West Tyrone and will be appreciated by the people of Drumquin and Drumquin exiles in various countries.

Twenty-five years ago Paddy’s much acclaimed publication 'Carrick in my Time' went on to sell 3,500 copies all over Ireland, Britain, the USA Australia and New Zealand. The blind poet from Drumquin recorded on tape all his songs and poems which his family have now published.

A concert celebrating Paddy’s work was held in Omagh Library on October 31, 2018. A special DVD of that event accompanies the publication of his songs and poems.

Paddy’s poems and songs cover events and people from Carrickmore to Greencastle, Castlederg, Omagh, Ballybofey, Mayo, Galway,Kildare, Knockmoyle, Gortin, Mullaghmore Co.Sligo and of course his native Drumquin. Some of these were featured last Saturday on BBC Radio Ulster’s 'Your place and Mine'.

"Included in the publication is a personal account by Paddy on how he coped with the loss of his sight as a result of a hereditary eye disease RP (Retinitas Pigmentosa). It is a graphic account of growing up in poor economic circumstance in a rural area of West Tyrone. He describes his struggle with night blindness and failing central vision in a moving, poignant and sometimes humorous experience in his four chapters titled “When it gets dark around my feet.”

"This is an accurate description of the difficulty a person with RP encounters in low light, at dusk and poorly lit venues at night. Paddy goes on to describes what is like for a person using a guide dog and the training involved. We have here a valuable insight for sighted people and for those who are blind or with poor sight but above all the transformation a guide dog brings to the life of its user.

"Paddy was a lover of traditional music and song and fittingly his family are donating the proceeds from the sale of the DVD to Drumquin Wolfe Tones GAA Traditional Music Group. Copies are available from Drumquin GAA Club, drumquingaa@gmail.com or any of the shops in Drumquin."