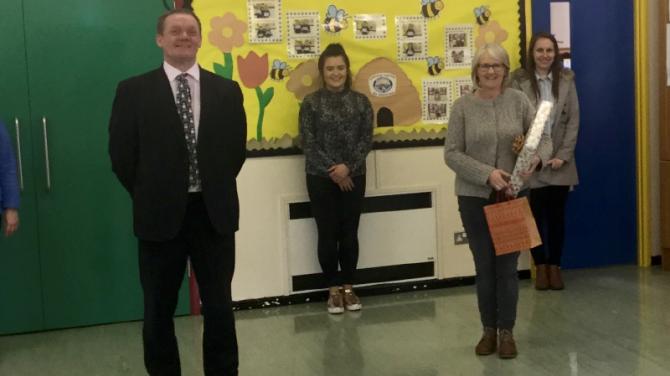 MCCLINTOCK Primary School, Seskinore, staff, pupils and parents had to say a sad farewell to their popular secretary, Mrs Janice Gibson, at Christmas, who has retired after 17 years.

She was presented with a gift from the Parents Support Group on behalf of the parents and pupils. Mrs Gibson also received a gift from the staff and a memory book from the pupils.

Mrs Gibson first came to the school 17 years ago in 2003 and since then was a diligent, popular and dedicated member of staff. She was often the first face or voice that her colleagues or visitors met when they came into the school building.

As an efficient secretary Mrs Gibson performed the wide range of secretarial duties, always to an impeccable high standard. This was illustrated in the many kind comments from parents, former pupils, colleagues and many others on the school’s Facebook page when her retirement was first announced.

On behalf of the McClintock community, Sam Dennison, principal, expressed the school’s wholehearted best wishes to Janice for a very happy, long and healthy retirement and stated that she would be really missed by all at McClintock.