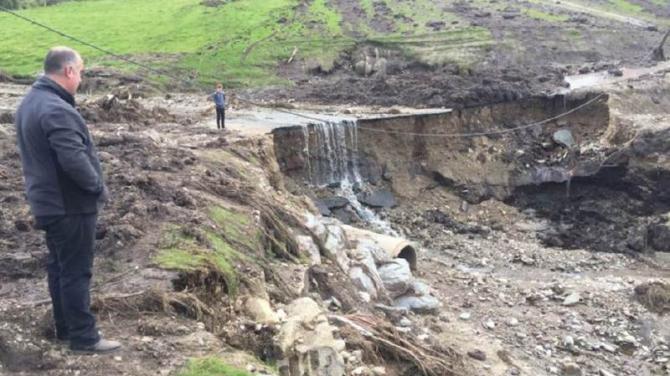 FRUSTRATION has been voiced at the length of time it is taking for a decision to be made on implementing a hardship scheme to recompense farmers in the Glenelly Valley affected by the devastating floods caused by freak rainfall over three years ago.

The floods of August 2017 caused thousands of pounds worth of damage when farmland and livestock were washed away in huge landslides which also deposited large volumes of silt, rock and debris.

The flooding disaster was described as a 'one in a 3,000-year' event.

Despite initial hopes, vital financial assistance for farmers from the government has never materialised.

Agriculture Minister Edwin Poots has not ruled out introducing a compensation scheme for those worst affected and says his officials are considering options to take forward.

He made the disclosure in response to a written Assembly question from the SDLP's Daniel McCrossan.

"I have not yet come to a decision on the provision of direct financial assistance to those farmers affected by the flooding that took place in August 2017," Mr Poots said.

"I have directed officials to consider delivery options for a scheme that could provide financial support to those farmers that were affected by the August 2017 flooding and subsequent landslides."

He added: "I will continue to consider very carefully all the relevant issues surrounding the matter before reaching a balanced decision in due course."

The Minister has been urged to act without further delay.

Mr McCrossan said it was "scandalous" that farmers have gone over three years without any compensation and says.

“It is hugely disappointing that, after over three years, Stormont and now the Minister has failed to compensate farmers and businesses for the financial hardship they’ve faced due to unprecedented floods," he said this week.

"Farmers and businesses, particularly in the Glenelly Valley, have continued to suffer financial hardship as a result of this devastation which has only been exacerbated by the current coronavirus pandemic."

Since the flooding, the matter has continually been raised in the Stormont Assembly by West Tyrone MLAs from all parties.

“The Minister has been in post now for almost a year where I have continuously raised this issue. He has so far failed to act and make a decision.

"The Minister must stop sitting on his hands.

"These farmers deserve compensation in the same way those in the South of this island received three years ago," Mr McCrossan added.