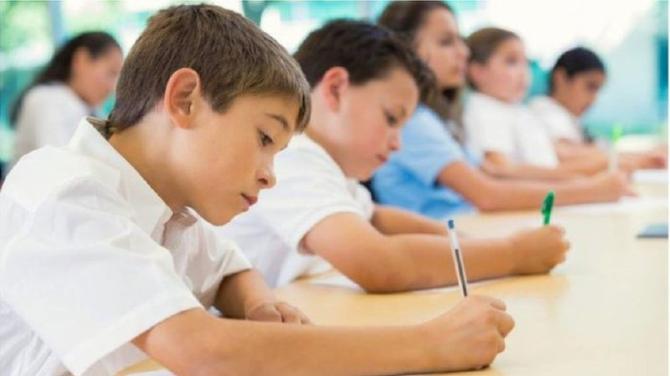 The AQE transfer test for primary seven pupils in Northern Ireland, which had been scheduled for 27 February, has been cancelled.

AQE have also said that no test will take place this school year.

The single test was scheduled after the three tests due to take place in January were cancelled.

The NI Education Minister Peter Weir said he was "disappointed" would not go ahead "on the grounds of public health".

"This will also be very disappointing for many pupils and parents," he said.

Post-primary transfer tests are used to select pupils by the majority of NI grammar schools.

A number of grammar schools had already said they would not use the test to select pupils this year.

Grammar schools who were planning to use the AQE test will now have to find alternative arrangements to admit pupils in 2021.

Mr Weir added that while the test was optional they had provided "parental choice and opportunity for children to gain a place at a post primary school of their choosing".

He said that he had already recommended that schools prepare contingency plans in the event of cancellation.

The education minister added that the criteria for admission to schools should be finalised soon and will be published by the Education Authority on 2 February.

In a statement the AQE board said: "Due to the ongoing uncertainty about the potential for an extended period of lockdown, the Board of AQE Limited has decided to recommend to our grammar schools, the membership of AQE, that there should be no assessment offered by AQE in this academic year.

"The test scheduled for Saturday 27 February will therefore not take place.

"The health and safety of the children due to sit the exams is our top priority.

"As we cannot guarantee that the Executive will not extend the lockdown period at this stage, we do not want to cause any distress to the children and their parents by extending this period of uncertainty.

"We know these are anxious times for many.

"We will be writing to parents individually over the coming days to confirm these arrangements.

"We hope this will end the period of uncertainty for the children who have been working so hard for these assessments.

"We wish to thank the Minister for Education, his officials and the Education Authority for their support".

"They deserve to be treated better than this," he said.

"Such a total mess! Bouncing our young people around like this is totally disgraceful.

"Let's hope they stand by this decision now."