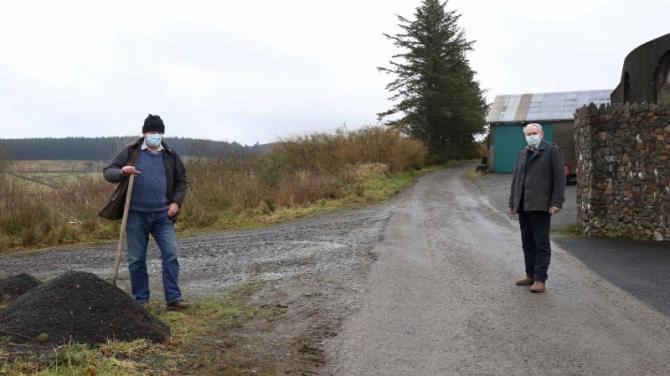 THE recent cold spell of weather once again highlighted a long-standing problem that residents on the Erganagh Road outside Omagh have been faced with for many years.

That's according to Geoffrey Simpson - who has lived in the area for decades and who warns the road - just off the Gortin Road - is particularly dangerous after a fall of snow, which Mr Simpson believes is owing to surface water from a nearby reservoir.

Mr Simpson said the road was not gritted during the most recent cold spell - until Department for Infrastructure (DfI) employees finally addressed the issue on Saturday, January 9, after the worst of the weather had passed.

"There are 17 houses on the hill of Erganagh Road, just off the Gortin Road, while the reservoir that serves Omagh is nearby," explained Mr Simpson.

"The Road Service used to leave piles of grit at intervals along the hill, but this year they did not for some reason. We would spread them ourselves if the piles were provided at the appropriate locations on the hill.

"About 10 years ago, the road was virtually impassible due to ice, and I was coming down to bring a nurse to a neighbour's house and I skidded, turned the car over, even though it was a 4x4. However, that was a long time ago.

"But the problem that has existed for many years is that, when surface water from a nearby reservoir runs down the hill and freezes, the road becomes very difficult for motorists. Anyone who doesn't have a 4x4 and doesn't know the road is bound to get into difficulties. If emergency services were on the road, where would they be?

"Last week motorists had great difficulty on the road, and there were a number of vehicles abandoned along the hill.

"The situation could have been avoided had there been grit in place, say at the end of November."

"The Road Service has generally done a good job, but they haven't kept pace with the problem which creates the difficulty - the surface water should be diverted at a point higher up the road," he said.

"I have been in contact with Road Service about this issue for many years. I know it's a minor road and they may have other priorities, but it's a dangerous situation. If more money was to be spent on rural roads then it would be beneficial to a lot of people."

Mr Simpson said he was speaking on behalf of all his neighbours, and he also commended Mid Tyrone councillor, Bert Wilson, for his work on this matter.

Mr Wilson said: "Farmers and people in the rural areas are working night and day. But the roads are making life impossible to get anything done. Roads Service haven't gritted a number of roads, and personally speaking on our own road we had a serious problem getting meal in, and we had to put sand on the road ourselves.

"On one day last week a tanker blocked a road outside Fintona due to the ice. The roads are disgraceful to anyone living rurally."

Mr Wilson said he had notified DfI about potholes on a number of local rural roads, but he is still awaiting many of the matters to be addressed.

A Departmental spokesperson said: “The Erganagh Road is not included on the Winter Service gritted network however the Department gritted it on Saturday, January 9 as a secondary action following the completion of salting of the main scheduled network.

"Grit piles have also been provided at various locations along the Erganagh Road to allow residents to treat the road on a self-help basis. These grit piles will be replenished throughout the area in the coming weeks.

"When water on the public road is issuing from adjacent land the Department will liaise with the landowners in an attempt to resolve the issue however DfI staff have inspected the location in recent days and could not detect any water flowing on to the road.”