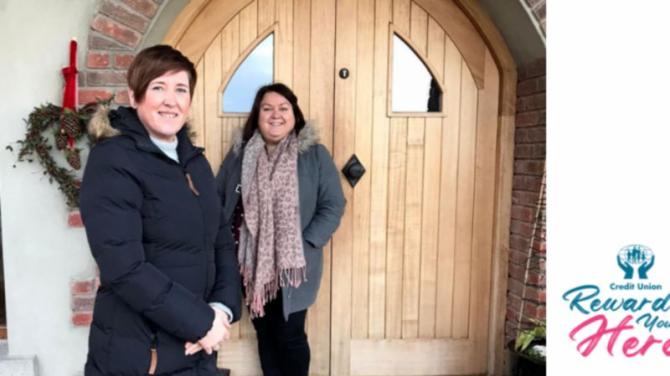 FOR the hand holders and hot-meal deliverers; the bedside carers, the grocery packers and stackers. For the ICU cleaners, late-night workers, and tear wipers – for the generous, the kind; for the lovers and the fighters. For the inspiring deed, the courageous idea, and the selfless act – for all those who made a heroic impact. This is for our Heroes of 2020, said Omagh Credit Union as it revealed a local winner of the Credit Union's 'Reward Your Hero' competition.

"The credit union, wanted to recognise the heroes of turbulent times. In what has been a turbulent year of suffering, illness and loss for many, it has also shone a light on the everyday heroes in our society. The “Reward Your Hero” competition had the aim of rewarding these heroes for their work and dedication to others in 2020," said a spokesperson.

"While the battle with Covid-19 continues to consume our everyday lives, some stories give you a much-needed lift through the turbulent times. From all the nominations all over Ireland, Cathy is one of three heroes who won. Cathy Burns, an SNA from Omagh in Northern Ireland, was nominated by her sister Emma as her hero. Due to the on-going restrictions, we unfortunately couldn’t visit Cathy and Emma in person, however, we virtually sat down with both sisters to find out how much a hero Cathy is!

"Cathy’s story caught our eye when her sister Emma described the incredible work she did throughout the lockdown for her local community in Omagh. After a conversation with her cousin, who is a midwife in Omagh, brought up the topic of PPE shortages, Cathy decided to see if she could help the situation. At the time, the demand for PPE across the world was huge. After the conversation, Cathy wondered if she could help in any way and sure enough, through a Youtube tutorial, Cathy went about creating a mask or two for her cousin and colleagues.

"Cathy created masks and began to drop them into local GP surgeries, local business and to frontline workers. Suddenly demand became huge, and she knew she needed an extra pair of hands. After a Facebook plea for helpers, 24 willing volunteers put their hand up. Through Trojan effort, Cathy and her team created over 3,000 masks across a nine week period. When delivering the masks to local businesses, one business expressed their desire to give Cathy and her and her team a donation. After some deliberation, Cathy decided that she would accept donations and give them to a charity at the end of it all. So she did just that!

"Setting up a just giving page was the easiest way to keep the donations in check, but little did they think their efforts would make some life changing differences to local charities! Raising a final total of £2,725 the next task was to decide where it should go. Cathy and her team picked two very worthy charities and their donations are already making a massive difference to the people they serve.

"The first charity were the Midwives of Omagh, with the story here being pretty special. As previously mentioned, the mask making adventures began after a chat with her cousin, who is a midwife in Omagh. When Cathy approached her cousin to say they wanted to donate half of the donations taken to the Midwives of Omagh, she knew exactly where this money could go – on a cuddle cot.

"Stillborn birth is a devastating reality for many families. The pain of losing a child is unimaginable and parents treasure every second they have with a sick or stillborn child. A relatively new creation in recent times to ensure parents and their stillborn children spend as much time together as possible before a funeral, is a cuddle cot. A cuddle cot is a special cold unit with a basket where parents can place their stillborn child. The cold helps preserve the body. With the cuddle cot, parents can bring their baby home rather than have the baby's body sent straight to the hospital morgue. They can take as much time as they need to say goodbye.

"With the funds raised from Cathy and her teams’ mask making, Omagh now have their very own cuddle cot. Previously any families in need of a cuddle cot in Omagh would have had to travel surrounding areas outside of where they live to have use of a cuddle cot. The difference this has made to the community in Omagh will never be forgotten and heroes’ like Cathy, creating small acts of kindness, create a huge difference to people’s lives.

"And if that wasn’t enough, Cathy and her team also donated money to their local hospice to allow them to purchase six mini fridges for the rooms of those receiving end of life care. These fridges are small aspect of normality and comfort for those receiving this quality care. It means they can have a small yoghurt, some jelly or even a “cheeky wee drink” as Cathy so brilliantly described it when we spoke.

"And so, from a small idea and the want to help and be a life line to others, Cathy and her team made life changing differences to two extremely important causes within their local community. A hero is a real person or a main fictional character who, in the face of danger, combats adversity through feats of ingenuity, courage or strength. Cathy epitomises this definition and always works for others.

"In speaking to Cathy, most notably her urgency to push the spotlight from herself to the team around her shows how humble and courageous she is. When we asked Cathy did she know just how much of a difference she made, she told us how her colleagues describe her; “Now I don’t know that I do, but the girls in work tell me when I walk through the door there are positive vibes bouncing off me! I mean I’m just used to doing things and not looking for recognition, I think it’s just a part of who I am”.

"Cathy’s motto is “no matter what the question is, my answer is always, 'nothing is a problem!” and this is what she lives her life by. Her sister Emma, who nominated her for this award, described to us just how important she is in not only their families life but in her local community, “everyone knows her as the one who does so much for others, and when I saw this initiative, I thought about nominating her for so long and I’m delighted I went ahead and did it”. “She’s been such a help to people in the community, putting a smile on their faces during the tough times. She’s the joker, the life and soul of any party and always at the other end of the phone – a true hero in all our eyes”.

"Since her Trojan work and effort for community, Cathy has recently been diagnosed with breast cancer. She is currently undergoing treatment and we have no doubt she will come out the other side, stronger than ever! A true hero in all sense of the word. She told us when it all passes and she gets the go ahead, her winnings will be used to treat herself and her family to a nice holiday!

"We'd like to take this opportunity to thank Catherine and all the staff at Omagh Credit Union and to Michael Brogan a Board Director for helping us present the prize to Cathy during these restricted times!"