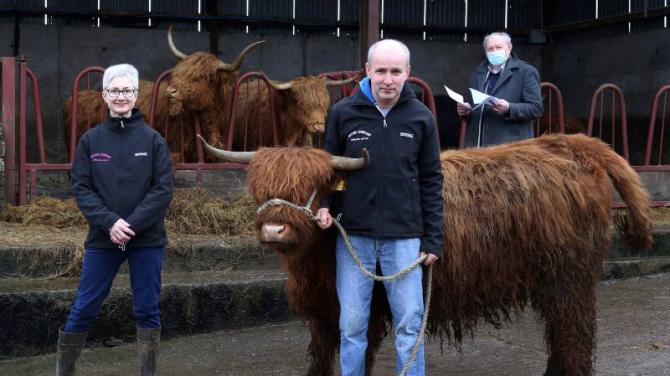 Mid Tyrone councillor, Bert Wilson, explained that Alastair and Linda Moore, from the Cookstown Road, bought a heifer privately from Scotland, however, they are now being asked to retag the animal due to new Brexit rules. According to Mr Wilson, this would significantly devalue the animal. The couple purchased the animal at £4,000, but if retagged it would be valued at around £1,000.

"Farmers are being encouraged to upgrade stock and only keep the best, and yet here is a young couple doing exactly that by introducing top-class bloodline to their pedigree herd of Highland cattle," said Mr Wilson.

"The grandfather of this heifer was a top prize winner and sold for 28,000gns. This heifer would have been going to a highland sale had it not been cancelled due to the pandemic.

"Alastair and Linda bought the animal privately, and they have now received correspondence that states cattle moved from Great Britain to Northern Ireland are now classified as an import from a third country."

Regulation states that as a ‘third country’, livestock breeders in England, Scotland and Wales will be required under EU legislation to use the official International Standardisation Organisation (ISO) two-letter country code ‘GB’ on tags, for livestock moving to Northern Ireland and EU member states.

"They have been told that in order to comply with Northern Ireland-European Livestock Identification Legislation the cattle must be re-tagged," Mr Wilson continued.

"Linda and Alastair now find themselves in a position that the animal may not be recognised as a pedigree, and reverts to a commercial animal and subsequently loses them thousands of pounds.

"If they do not comply, they run the possibility of being prosecuted, or indeed losing their single farm payment.

"Through no fault of their own, this young couple find themselves in an impossible position."

Mr Wilson said the NI Protocol is causing "misery" for those who work in the agricultural industry and must be removed.

Mr Moore said he had received support from the local agricultural office, but stressed that "both parties are suffering from decisions taken by above."

Man to appear in court on gun and drugs charges