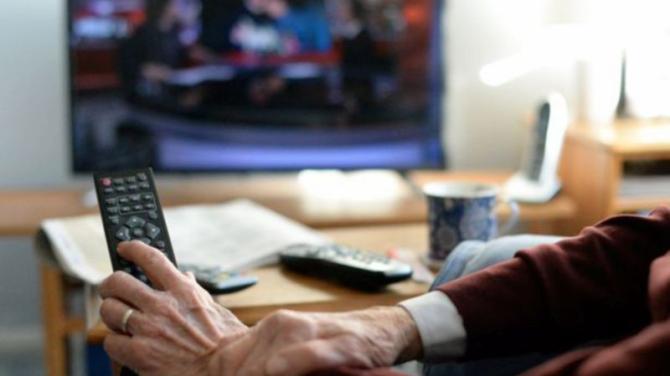 MEMBERS of Fermanagh and Omagh District Council have unanimously called on Stormont to cover the costs of TV Licences for over 75's, who until recently were not required to pay. While there was some debate around the provision of funding, the chamber was united.

Proposer Councillor Donal O’Cofaigh, Independent, condemned the re-introduction of TV Licence fees for over 75’s who do not qualify under the narrow exemptions.

He said: “This tax on our elderly, guarantees income by their need to have a television. It adds further financial hardship particularly given those who are housebound and doubly impacted by Covid-19 restrictions which has left many alone, isolated and without communication or engagement.”

The motion called on the Executive to adopt a similar approach to the transition from Disability Living Allowance to Personal Independence Payment, by providing matched funds of any loss.

While acknowledging the issue sprang from Westminster, Councillor O’Cofagh added: “Absent any movement, we need Stormont to act. The cost would be an estimated £20 million, and that’s a lot, but over £200 million is unspent and likely to go back to London. In the overall Stormont budget £20 million would be relatively small, but the impact would be huge … Many elderly people are already choosing between heating or eating. Some won’t be able to pay and could potentially fall into legal threat.”

He concluded: “Television is often the only source of information for many older people. A recent survey said one in two felt their television was their only source of company. It’s inhumane to force older people into this situation. In the absence of any humanity in London, I hope this council will ask for humanity from Stormont.”

Seconding, Councillor Emmet McAleer, Independent said: “It’s a vast amount for senior citizens but a relative drop in the ocean for Stormont. With the money in line to be returned to the Treasury, I don’t think it’s a major ask. Hopefully, we can instigate this.”

He added: “This is a form of abuse in terms of the pandemic and rurality. Many are without proper mobile phone or Broadband coverage. The television may be the only access to visual contact during these strange and unsettling times.”

Sinn Fein’s Councillor Sheamus Greene said his party in totally in favour of free television licenses for over 75’s, but expressed concerns that the motion asked the Executive: “To take £20 million out of their budget to subsidise the BBC. I find that an extraordinary ask.”

Councillor Adam Gannon SDLP retorted: “The Finance Minister is on the brink of sending hundreds of millions back unspent. A television can be a lifeline and a source of companionship to older people. It’s particularly prevalent given the isolation caused by the pandemic. The decisions to remove free licences hurts the most vulnerable.”

Also supportive, Independent Councillor Bernice Swift said: “This is a call for humanity. However, I feel expecting Stormont to take any action is stretching incredulity to believing in leprechauns. I would have taken a step further to seek a total abolition of any licence for those age 75 and over.”

Councillor Alex Baird, Ulster Unionist said the after Westminster withdraw the initiative, the BBC were forced to pick up the tab.

“They now can’t afford it so somebody’s going to have to pay. It should be Westminster and maybe that’s the direction we should go. But half a loaf is better than no bread and if the over 75’s end up getting free TV Licences, we can lobby Westminster subsequent to that.”

Independent Councillor Josephine Deehan pointed to on widespread condemnation on reintroduction of TV Licences fees and all lobbying against this was fruitless.

“It’s absolutely disgraceful. As we have met with no progress, then it falls on us to lobby Stormont,” she said.

Councillor O’Cofaigh concluded: “Westminster has undermined our older people and the only weapon we have to change that is Stormont. They have the power to take this on. It has not strongly enough defended interests to date. Stormont has already provided payments to avert some of the worst excesses of Tory austerity, although not anywhere near enough. We’ve seen payments from the transition of DLA to PIP and equally, huge sums to prevent the roll-out of water-rates.”

The motion passed unanimously and Councillor O’Cofaigh urged other councils to follow Fermanagh and Omagh’s lead.