Roads Service to the rescue for newly-wed couple! 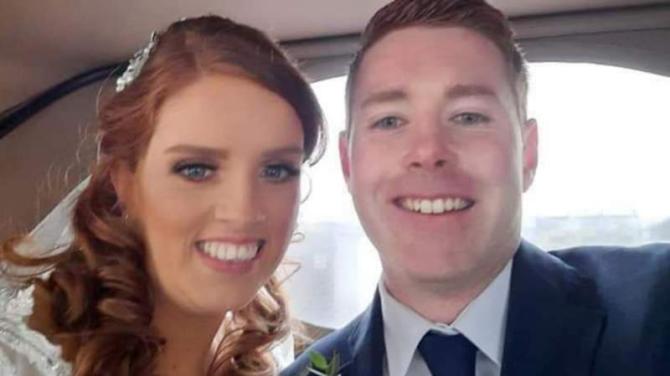 THE Roads Service came to the rescue of a Ballygawley couple in the early hours of Saturday morning to ensure their wedding day could safely go ahead.

The bride, Emma Conlon, woke on the morning of her big day to heavy snow and faced the prospect of being stuck in her home on the Lismore Road, just outside Ballygawley.

She was faced with two options: a) to postpone the wedding for the second time, or b) summons all tractor drivers in the area to take the bridal party to the chapel!

Thankfully, the Roads Service arrived to save the day, allowing Emma and her family to safely travel from their home to the Church of the Immaculate Conception in Ballygawley, where groom Martin Quinn was waiting.

"We live on a wee country road on top of the hill, and despite two Child of Prague statues being left outside, we were realising that this may not prevent us from been snowed in," said Emma.

"Mum contacted the Roads Service Western Division gritting department to enquire if our road could be gritted and a snow plough used if needed.

"After several phone calls with the gritting team, we were assured that they would try their utmost to make sure I got to the church on time. We understood that all main roads were priority and were also aware a funeral in the area was taking place on Saturday morning as well.

"Nonetheless, at midnight, a cascade of flashing orange lights and roar of an engine cut through the darkness outside - the gritter men had arrived!

"They stopped outside and waved towards the livingroom window, beeping the horn and smiling! I was so excited I ran out in my dressing gown to thank them and hear the craic.

"They promised me they’d be back in the morning when the snow arrived and, fair play to them, they stuck to their word. Absolute gentlemen, and their efforts made all the difference."

The couple had originally planned to get married in September last year but postponed the occasion to February due to Covid-19 concerns.

And although they were limited to just 25 guests, Emma couldn't have been happier with how they day panned out.

Emma would like to thank the Department for Infrastructure for their assistance publicly "from the bottom of my heart".

While her neighbours were on stand-by with their tractors ready, due to the diligent efforts of the gritting teams and as a result of roads being cleared, Emma's wedding cars safely arrived!

"We made it to the chapel on time, and I am eternally grateful also to all my lovely relatives, neighbours and friends who were very kind in offering assistance," she said.

Emma's mum Liz said the wider family, who live in the Carrickmore area, had planned to wave Emma in and out of the chapel - but unfortunately due to the snow they were unable to do so. However, thanks to the internet, they were all able to tune in and watch the service on webcam!