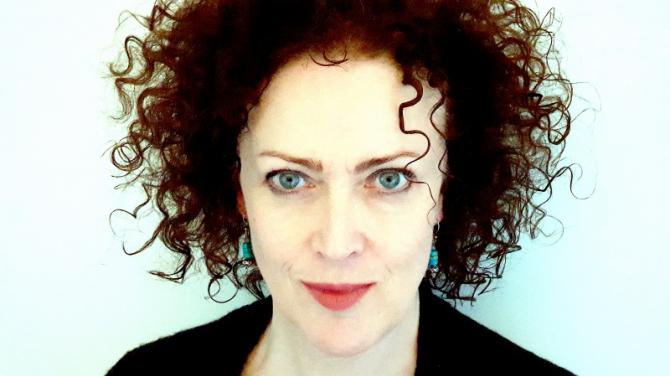 CASTLEDERG native Tish Delaney moved to London at the age of 18, where she has gone on to become a successful writer, and she is proud to have had her debut book 'Before My Actual Heart Breaks' published.

Before My Actual Heart Breaks is published by Hutchinson, an imprint of Penguin Random House. The Audible version is read by Derry Girls actor Saoirse Monica Jackson, who played Erin.

"My Northern Irish upbringing was not one filled with books but it wasn’t short of stories," Tish explained.

"My uncles would come into the house about once a month in the winter to fire up their pipes, open a few bottles of stout and settle back to scare the living daylights out of the children. Even if we were safely tucked away in bed, when they’d caught up with the news of the day, we’d be winkled out and made to sit in front of the blazing range while they wound themselves up to deliver a variety of lost loves, restless spirits, tales of souls snatched away and often the Devil Himself. By the light of a Tilly lamp, ghosts drew up to the table.

"What I remember most of all is how much I loved it. It was a night of theatre in the kitchen. I knew the stories, I knew the characters, I knew every plot line and twist. I knew when they’d swap in the names of someone recently dead to spice it up. I knew I was hardly breathing. I knew the minute when the women in the room would step in to put an end to the shenanigans.

"When we were allowed back to bed, shaking in our socks, my mother would leave us with her own words of wisdom: stop whinging, it was only done for the craic. Sure enough, we lay there for a good while listening to them all laughing their heads off and waiting for our hearts to stop battering our ribs.

"What I knew was that it changed the days, for us and them. A good yarn sets you up for the week ahead, you always have it with you. You can pull it out and examine it when you have time to spare and see it from every angle. You can wonder if it’s the truth or a lie. You can use it to measure against the stuff that crops up as life unfolds.

"Sometimes, forty years after I’ve first heard it, I still find myself thinking, well, at least I’m not as badly off as the poor auld man who got eaten alive by black dogs when he climbed into a cursed man’s coffin. Why did he do that? For the craic, of course. When money’s short, daylight’s short and you’re in no doubt that life is short, a good story goes a long way to make it better."

Tish continued: "Like most writers, I’ve written since I was young but I didn’t sit down in earnest to write a book until I was in my forties, an age when you realise what you’ve lost. When I did, the result was Before My Actual Heart Breaks.

"Like a lot of people of my generation, I left Northern Ireland at eighteen and lived my life in London. I thought the City would inspire my stories but I was wrong. It was these people I recreated, the storytellers themselves from my childhood in Castlederg , a border town in rural County Tyrone where it sat cheek by jowl with Donegal. The farmers, the housewives, the gossips, the hypocrites, the shopkeepers, the good Catholics and the bad, the most ordinary of folk kept wandering about wanting to have one more word before they left. I want to capture the essence of them, to keep them from fading. I want everyone to meet them because they were bloody brilliant and flawed and funny and drowning in sadness all at once.

"Central to Before My Actual Heart Breaks is the theme of secrecy. The main characters Mary and John live a lie in plain sight. His mother is entirely complicit and no-one ever thinks to ask a single question that would rip the scab from the thin skin they’ve grown over their decent Catholic union. This is a situation that was played out in several families when I was a child – it was as accepted as black eyes at the altar steps and the overnight disappearance of Priests who were soon to be fathers of a different kind.

"One of the things I want to achieve with Before My Actual Heart Breaks, indeed with all of my books, is the reality that we lived. Growing up at the height of the Troubles, life was still largely about having fun and getting an education and going out to dancehalls that could be bombed because you wanted to meet someone and get married one day and live happily ever after because no-one ever told you that you had a 50/50 chance at that particular fairytale at best.

"What if even a single one of them said aloud that not every marriage is happy? What if they hadn’t kept all the juice for the sanctity of the confession box and the hungry ears of a supposed-to-be-celibate Priest? Everything was a secret, life happened behind closed doors and they applauded each other’s ability to keep it that way. I want to open that door and let people like Mary and John in Before My Actual Heart Breaks take their turn in the light. They are a rich seam and it’s a beautiful big bog."

The book is available from Amazon, Waterstones and many independent bookstores.