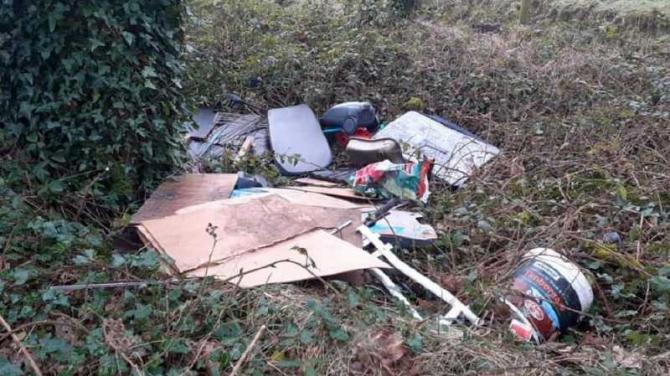 COUNCILOR Frances Burton DUP, Cllr for the Clogher Valley area has condemned the recent fly tipping incident at Lumfords Glen, at the entrance of the lower car park.

Cllr Burton said “It is an absolute disgrace that someone feels they can just pull up to this remote location and discard all their rubbish leaving it lying by the side of the entrance of the carpark instead of just taking it home to their own bins.

"This is such a waste of resources and staff time at a time of pandemic when people want to use recreational facilities in their neighbourhood. It has caused great annoyance to the local residents who enjoy the tranquility of the area and take such pride in it.

"I commend our staff who have diligently gone up and cleared away all that was dumped at the site. It is a sad reflection on whoever left this the way they did, with no regard for those who have to come behind them to clean it up."

"My party colleague Cllr Wills Robinson supported by all of the Clogher Valley councillors from across the political members wanted to see improvement, especially when it is so closely linked to Knockmany Forest site, which has saw increased footfall due to the upgrade and provision of toilets at it’s location. Through the Development Committee I have regularly asked for more joint up working between ourselves and forestry to develop Lumfords Glen as officers meet regularly on forestry issues. When you see what has been done in Knockmany, Brantry Forest and indeed the investment at the Round Lake for leisure and recreation for residents and tourists alike, it is our strong desire to keep improving the hidden gems of the Clogher Valley.

"Although Lumfords Glen is owned by Forestry, we as Council have licence for use for recreation and leisure. Unfortunately over recent years there has been considerable damage to the paths and walkways due to land slides and erosion of the paths and fallen trees. The area is exposed to all elements of weather which has really taken its toll on the paths. It is our hope that we can work in partnership with forestry to bring this area back so that people can benefit from the natural beauty of the location. Many residents have spoken about the waterfalls and have expressed their sadness at how it has deteriorated over the time and would feel it unsafe now. They like we want it upgraded to its former glory. It holds many fond memories for local residents and visitors alike."