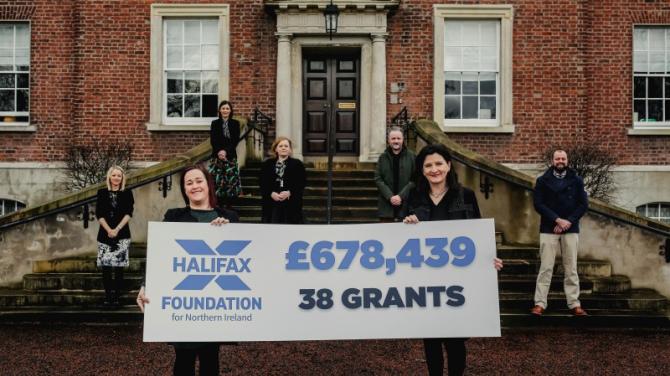 OMAGH Women’s Aid has been awarded a large grant of £50,000 from Halifax Foundation for NI to help with its EmpowHer Project which supports women who have experienced domestic violence.

This grant is part of Halifax Foundation’s commitment of £678,439 funding to 38 charities providing vital services for some of the most disadvantaged people in the community.

The Foundation has released two special grant streams to target groups most affected by the pandemic at a time when charities are under unprecedented pressure.

The Large Grants Scheme will provide funding up to £50,000 over the next three years for 10 charities working in areas such as mental health and domestic abuse while the Special Initiatives Scheme gives up to £20,000 to seven major organisations supporting the sector over two years.

In addition, through its Community Grants programme, another £76,446 will go to 21 charities.

Brenda McMullan, executive director of the Halifax Foundation for NI, said: “The community in Northern Ireland has suffered greatly over the past year. This money will go to supporting key projects that will make a major impact on people’s lives by targeting the areas of most need.”

Charities supported by the Large Grants Scheme include:

Foundation chairperson Paula Leathem said: “We felt it was imperative to provide additional tailored support to local charities as we start to rebuild after the pandemic. Not only will these projects receive funding but they will also have mentoring support from key staff at Lloyds Banking Group.”

The Special Initiatives Scheme is designed for organisations that support the community and voluntary sector, helping it to grow and develop.

These include projects for: C03, NICVA, Northern Ireland Sports Forum, Rural Community Network NI, Volunteer Now, Will to Give and Sported Foundation.

The Halifax Foundation has just marked its 35th anniversary of grant funding in Northern Ireland. Over that time, it has given £39 million to local charities.

The organisation receives an annual donation from Lloyds Banking Group to fund all its Grant Programmes, including its Matched Giving Scheme, which supports the fundraising and volunteering efforts of staff from Halifax and Lloyds Bank in Northern Ireland.