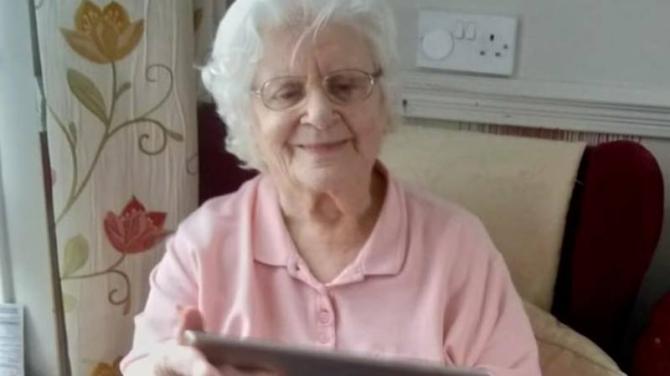 AN 86-year-old kindhearted Ederney woman is putting smiles on the faces of children across the world by knitting and donating jumpers.

For well over 10 years now, Sarah McMenamin has been quietly knitting thousands of jumpers for orphans and children in some of the world's poorest countries.

Working alongside various charities - including The Niall Mellon Trust and Chernobyl Children's Appeal - the jumpers are sent to townships in South Africa, Ghana, Romania - and the latest load is being delivered to Cameroon.

Her daughter, Caroline - who is one of her seven children - said the family is very proud of her.

"My parents had a farm at Gushedy, and there wasn't much money at the time," said Caroline.

"Mummy would have knitted a lot of clothes for us - wee jumpers and dresses, hats and stuff like that - she was always knitting.

"Unfortunately my father died when he was aged 53. There were seven children, with the oldest being 18 and the youngest just eight, so mummy was left with us and the farm.

"She obviously had to make a bit of extra money so she began to knit jumpers and cardigans for Magees in Donegal. She was known as one of the best knitters that they ever had. Tourists from the United States would have paid a fortune for the clothes."

Mrs McMenamin was taught how to knit as a young girl at Moneyrice School, Ederney, and in her teenage years she also worked at a tapestry house in Kesh, and she would have cycled to work from her home outside Ederney.

When grandchildren were born, they were only too happy to receive beautiful clothes lovingly knitted by 'Granny'.

"A friend of mine was knitting jumpers for charity and I told her my mum would be interested. When I told mummy, she was absolutely delighted to help, she just couldn't believe these wee jumpers were being knitted for the children in foreign countries.

"She's been doing it ever since, and I think she must have knitted thousands."

Not only is Mrs McMenamin helping thousands of children across the world, but the voluntary work has also helped kept her busy during this incredibly difficult time of lockdown.

"She received a photo of some of the children wearing their jumpers, she keeps it in her knitting box and she's very proud of it," said Caroline.

But it's not only children benefiting from her generosity.

"I volunteer at Bright Eyes Animal Sanctuary in Ballinamallard and we actually take some of the jumpers to the wee dogs - these jumpers are definitely getting around a few places!"

During lockdown, she has been keeping in contact with her family via a mobile phone recently purchased - and also thanks to technology she is learning new ways of perfecting her knitting through YouTube!