Call for derelict bungalow anti-social hotspot to be demolished 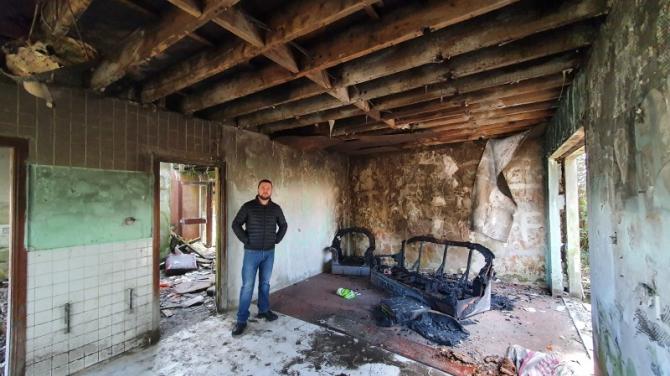 A DERELICT bungalow in Castlederg, which is reportedly being used as a 'drinking den' by young people should be demolished, a local councillor has said.

Sinn Féín's Ruairí McHugh says that the property off the Kilclean Road in the town, which he says is being used for drink and drug fuelled anti-social behaviour, must be tumbled without further delay.

Speaking yesterday (Tuesday), councillor McHugh said residents living nearby are being "tortured" as a result of the antics of those congregating regularly at the property.

“Residents in nearby Castleview Terrace, Killeter Road, Thomas Street and Milldam View, many of whom are elderly have been tortured with loud music, noise and general anti-social behaviour resulting from this derelict bungalow having been appropriated for use as a drinking den," he said.

“Just on Friday night, the fire brigade and PSNI both had to attend the scene after a sofa had been set on fire by those inside the bungalow.

"The resulting commotion once again waking and causing further distress to residents and also putting their own and the lives of firefighters at risk as a result of this arson."

Councillor McHugh says that many of those involved in the ongoing behaviour are underage and he has appealed for parents to make sure that their children are not entering the bungalow.

He added: "Particularly concerning is the fact that most of those who have been frequenting this bungalow and exposing themselves to multiple potential dangers have been underage.

"They are getting over 18s to purchase alcohol for them and I would encourage anyone doing so to stop.

"Equally, local parents should ensure that none of their children are involved.

“In terms of the property itself, I was in contact with council’s Environmental Health Department a number of weeks ago whose officers have spoken to the site owner who has given assurances it would be demolished."

Councillor McHugh said that if this isn't carried out in the "near future", he will be asking council to serve a legal notice requiring that the property is made secure under Article 66 of the Pollution Control and Local Government (NI)Order 1978.