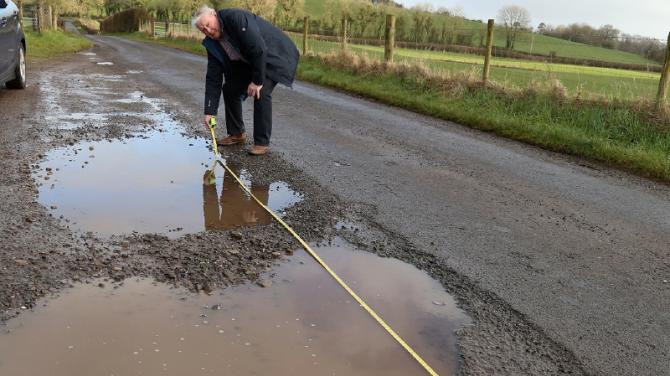 FOLLOWING on from the Tyrone Constitution’s efforts to shine a light on the district's pothole 'crisis' in recent weeks, Mid Tyrone councillor, Bert Wilson, has called on the Department for Infrastructure (DfI) to address two more local roads.

Mr Wilson has been contacted by residents of the Drummond Road - between Fintona and Dromore - about the number of potholes and asked the DfI to take immediate action.

"It is a road that is used pretty extensively," he said.

"It is only half-a-mile long, but it is in a seriously bad state. If there's a fall of rain at all then it becomes more like a pond than a road. The local residents there are up in arms about it. It's a mess and the water is splashing up over their property. There is one about six inches deep."

Furthermore, the potholes on the Ballynahatty Road - close to Tattyreagh - are also proving a "nightmare for motorists", he said.

"Motorists are trying their best to avoid the potholes, but they're ending up driving on the grass to do so," Mr Wilson added.

"I have had Roads Service out around six months ago, but they seemed to have ignored the issue, even though the potholes would cut the tyres of a vehicle.

"If you don't know the road, you are into the potholes before you know it. There are at least five potholes right on top of each other. It's practically impossible to avoid hitting them, so work needs to be done as soon as possible.

"The potholes are getting worse, there's even one that's about seven inches deep. They really need to be sorted out."