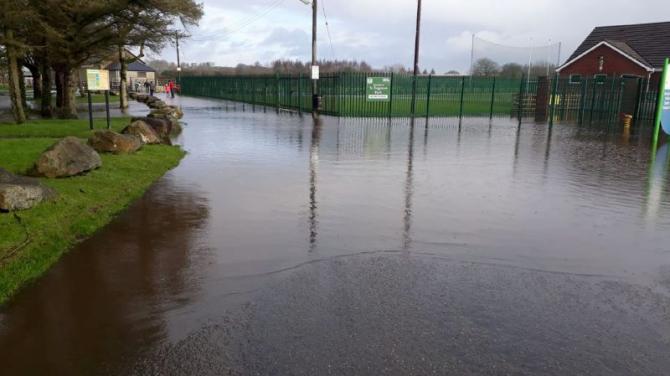 A STORMONT minister has ruled out a scheme to alleviate the risk of flooding in Newtownstewart.

Over three years ago the Strule River overflowed its banks flooding homes in Castle Brae as well as commercial premises and caused substantial damage to the local GAA club and other recreational facilities at Vaughan's Holm.

Local politicians have long lobbied for additional flood prevention measures for the area and this intensified following the unprecedented flooding of 2017, while other bouts of heavy rainfall and subsequent flooding from the River Strule have threatened to inflict further damage.

Following the 2017 flooding incident consultants were appointed by the Department for Infrastructure (DfI) to assess the viability of a scheme in the town.

The report identified seven homes, five commercial premises, a church hall and the grounds of the local GAA club all located in close proximity to the River Strule as being most at risk by flooding.

It also critiqued three options with varying measures ranging from full to partial protection of the areas affected however it recommended against each option on the basis that they were all financially unviable citing the cost of the protection measures outweighing the value of the homes, premises and facilities in the areas of most acute risk to repeat flooding.

Despite the continued threat, nothing has changed.

The Sinn Féin politician had written to the Minister requesting an update on the consultancy report to assess the feasibility of different options to combat the risk of flooding in the town.

In her response, Ms Mallon reaffirmed that a study to determine the feasibility of any flood alleviation scheme had shown that options for potential schemes are not financially viable.

"As you may know, following the significant flood event that affected large areas of the Northwest in August 2017, my department carried out a flood study to assess the flood risk to Newtownstewart from the River Strule," she said.

"The aim of this study was to assess the level of flood risk to properties in the town and to identify if there were any economically viable engineering solutions to alleviate this risk.

"Unfortunately, this study has shown that a flood alleviation scheme at this location would not be cost beneficial.

"I recognise that this will be a disappointment to the owners of properties that are known to be at risk from flooding, but I can confirm that my department will continue to carry out watercourse maintenance and regular grille inspections in the area, to help ensure that there is no increased risk of flooding."

Ms Mallon said the potential for other mitigation measures to reduce the risk of flooding to properties in the town is being explored.

"One practicable option is for domestic property owners to avail of the Home Owner Flood Protection Grant Scheme run by my department.

"Successful applicants receive 90 per cent of the costs (up to £10,000) to modify their properties to make them more resistant to flooding," she added.

Commenting on the missive, Ms Begley said the Minister's position is deeply frustrating and disappointing.

“Residents in Newtownstewart who have been severely impacted by flooding in recent years will be extremely disappointed by the Infrastructure Minister, Nicola Mallon’s decision not to implement a flood alleviation scheme for the area," she said.

“I have been engaging with the Department for Infrastructure to introduce defence measures to protect homes and businesses that are at risk of flooding.

"The Minister’s latest response that such a scheme is not feasible, is deeply frustrating.

“Flooding has cost people living in Newtownstewart financially and personally so there is a need for major investment in flood defence infrastructure."

Ms Begley said she will continue to press the department to £ensure they prioritise exploring other possible mitigation measures".

“It is imperative that the department step forward to prevent us seeing the type of flooding we have seen in recent years," she added.