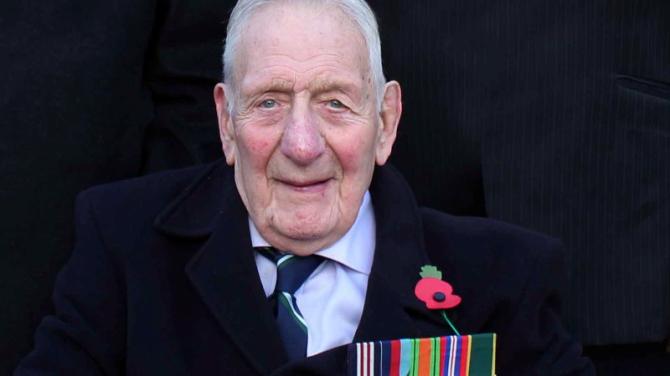 WAR hero Bob Lingwood, 102, has lived through many tough times in his life and he strongly believes - after the toughest year in many decades - better times are indeed ahead.

Last year, Mr Lingwood, of Sunnycrest Gardens, Omagh, described coronavirus as "more frightening than Hitler" having served with the Royal Signals during the Second World War and being captured in Belgium, but managed to escape under fire from his Nazi captors.

He has taken a significant step to also defeating Covid-19 as last week he received his second dose of the vaccine.

"When World War Two finished, we came home to destroyed cities and the economy had crashed," he said.

"It took us a long time to get over the restrictions, but the exciting part was that we had brighter times ahead.

"In the past, when we had a setback, we redoubled our efforts to get things moving again. I think good times are ahead now."

He stressed that while another outbreak may occur in the near future, the country now has the experience to "deal with it more effectively".

"I think we can see light now at the end of the tunnel," he added.

On being vaccinated, Mr Lingwood said he felt "relieved".

"If I had got coronavirus, it would have been difficult to overcome, but it would be much milder if I contracted it now," he said.

"The vaccination programme has been a real breakthrough, and it's just amazing how quickly it has come."

While Covid-19 may have changed life forever in ways, Mr Lingwood said people will learn to adapt and thrive.

A founding member of Shopmobility, Mr Lingwood is also involved with Omagh Probus Club, Omagh Gardening Society, and in order to remain involved with both committees, he has had to embrace the use of technology, using Zoom to participate in online discussions.

"All of the organisations I'm working with use Zoom, but it's not as good as face-to-face," he admitted.

"When we are talking about changes, they are already happening and I was very sad to read about the demise of Omagh Lions Club."

While he acknowledges many people are left isolated at this difficult time, Mr Lingwood feels lucky to have a weekly appointment with a local physio.

"I have a sore leg and some problems with my feet and I see the physio, and the physio for me is not just treating my leg, it's also a mental thing," he said.

"When I'm walking through the hospital, people say 'hello Bob'. I just love people, and one of the joys in my life has been working with and dealing with people. I see the best and get the best from people."

Mr Lingwood, who is originally from London but has lived in Omagh for many years, says he is "happy" with life at the moment, but he can't help but think back to the days he was playing football!

"My beloved Chelsea are doing well. I played for Chelsea schoolboys, and I was the ballboy at Stamford Bridge for a couple of years," he said.