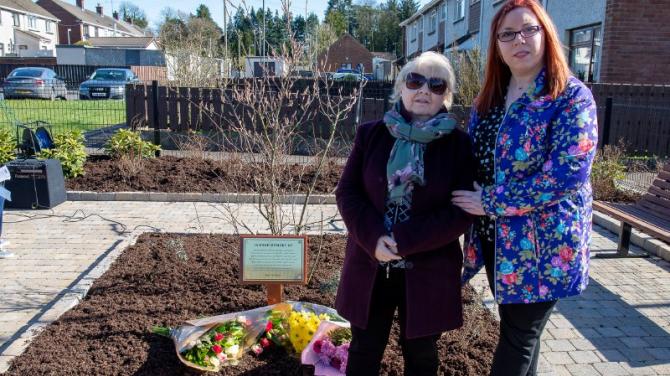 A MEMORIAL garden for young people, who have passed away from O’Kane Park/Culmore Park in Omagh, has been revamped by the Housing Executive.

Back in July 2005, O’Kane Park/Culmore Park had a week-long celebration to mark 40 years of the estate.

As part of these commemorations, a cross-community service to remember young people from the estate that had passed away was held and the memorial garden was created in recognition of this.

Plaques were also placed in the garden in respect of the young people and some trees were planted in their memory.

A Neighbourhood collection helped fund the garden, as well as a book reflecting on the history of those first housed in the estate.

Over the years, however, the condition of the garden and the plaques had become unsightly and in a poor condition.

The Housing Executive’s Grounds Maintenance Team helped design a plan for the upgrade work and a new plaque was fitted recently in memory of the young people.

O’Kane Park/Culmore Park resident, Mark McGrath, is delighted with the finished look of the garden.

He said: “The Housing Executive helped to build the park back in 2005 and memorial plaques were also fitted then too, along with trees, shrubbery and flowers.

“Through the years, however, it got a bit run down and it really needed a facelift.

“We spoke to Edith Bell from the Housing Executive and also South West Area Manager, Oonagh McAvinney about transforming the park and bringing it up to a better standard.

“Work to the garden started early last year and the garden has been totally transformed.”

Mr McGrath continued: “The old plaques that have been removed are now buried in the grounds of the garden, instead of being dumped and a new plaque has been fitted with the names of our loved ones on it.

“New shrubbery and fencing has also been put in the area and a couple of summer seats too.

“The garden means a lot to me because my late sister’s name, Kathleen is on the plaque and she was just 14 when she sadly passed away.

“Along with the rest of the families, we are delighted the garden has been transformed and it means our loved ones will always be remembered in the area – and that’s what matters the most to us.

“I would like to thank the Housing Executive on behalf of all the relatives for their help with this and they have been very good over the years at maintaining the garden and of course investing in this latest project.”

South West Area Manager, Oonagh McAvinney said she was delighted to be involved in updating the memorial garden which means so much to the O’Kane Park/Culmore Park residents.

She said: “We were very happy to work alongside and listen to the local community, particularly on such an emotive project like the memorial garden and helping to improve it for residents.